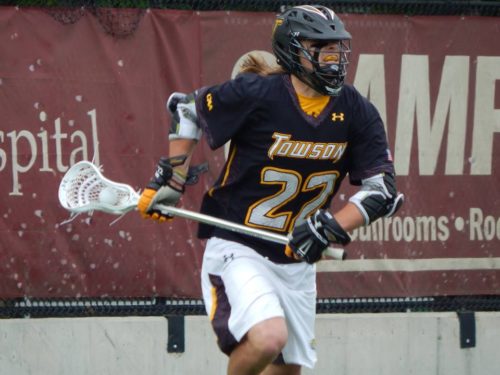 Intensity was the focus of the Tigers upset of the defending National Champions Denver Pioneers. There were multiple aspect playing into Towson’s win in the Mile High City, but intensity is what made it all happen.

To start, Trevor Baptiste may have won 20 of 22 face offs, but that didn’t necessarily guarantee Denver coming up with the possession and offense. Towson in actuality came up with the majority of face off ground balls throughout the game, and Baptiste didn’t win them easily over the Tigers’ Patrick Conroy or Alec Burkley. Both Tigers put up fights for the ball.

Intense checks were exchanged all game. DU saw two of their sticks break during the match, and the slap checks were heard across the stadium. Denver defenders were great with body position – getting themselves positioned to check stick and arms and hands.

However, Towson’s No.2 defense was the highlight of the day, positioning themselves relentlessly against the Pio offense. Very few dodges beat Tiger defenders, and passes for feeds – especially through the middle- were knocked down and intercepted all game.

Towson led the game with shots on goal, 34 to Denver’s 33, and created many more opportunities. They pressured the Pioneers, attacked from all angles, and controlled the ball in crucial situations.

On the other end of the field, Denver struggled all game to control the ball offensively. Repeatedly, the same pass play from X-behind (multiple Pio players there) went way overhead for unforced turnovers. Unforced turnovers will lose games all day, every day. Towson was efficient and accurate with punishing stick checks, and double- and triple-teamed the Pioneers all day long.

Alex Ready had the mediocre performance he’s faced all season, but especially the last 3-4 games has struggled for reasons only known to him. Tigers goalie Tyler White was phenomenal in his gameplay, and quarterbacked his clears exquisitely – even against the pressuring rides.

Overall, it was obvious Towson was more ready for the spotlight. They prepared better, played faster and more intense, executed accurately, and had much fewer mistakes. To top it off, their traveling fans – approximately 20-25, were louder than the entire DU stadium throughout the entirety of the game. All momentum was in the hands of the east coasters.

Denver heads home, their postseason aspirations halted short. DU fans could be heard telling the team upon departure, “Heads up boys,” “Great game,” and more fan-like statements of, “Can’t win when the refs are against you.”

Towson heads on to the Quarterfinals. They will take on Loyola, another surprise upset team, in Columbus, OH on May 22nd at 2:30pm.