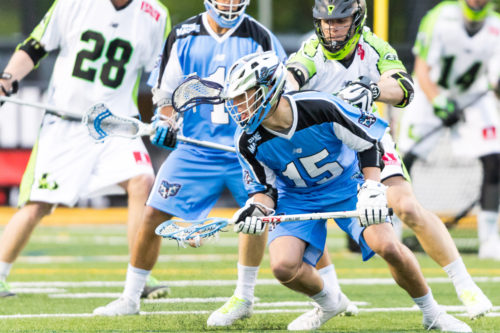 By this time last year, the New York Lizards were 3-0, and taking the MLL by storm with talks of going undefeated. This year, those talks have been put to rest, at least for the Lizards, as they were handed their first loss of the season by the Ohio Machine 22-10.

The first quarter can best be summarized as a two-man show. The scoring for both teams was done by one player. Aside from the opening goal being scored by Rob Pannell, the Lizards relied on Tommy Palasek for the entire quarter, scoring three goals for his team. As for the Machine, they got a two-goal contribution from Marcus Holman and one goal from Peter Baum. New York had the lead 4-3 at the end of the quarter.

Second-quarter scoring more of the same for Ohio, but this time, the offense came from Brandon Mangan, scoring three goals in the second quarter along with Baum’s second goal of the game. The same couldn’t be said for New York, as they only saw their offense score two goals, one by Palasek and another by Dave Lawson. The Machine pulled out front going into halftime 8-6.

The team strategy changed for Ohio in the second half. Now, the offense is spreading out, getting contributions from multiple players. Mangan, Holman, and Baum continued to power the offense, with Baum tallying a hat-trick with a two-point goal and Holman and Mangan each totaling four goals, but now players like Mark Cockerton, who scored two goals in the third quarter, and Tom Schreiber were getting involved. The Lizards were once again limited to two goals in the quarter, one by Palasek and the other by JoJo Marasco, and the game was slipping away from them, 16-8.

The fans continued to see the Machine offense dominate the Lizards defense. Holman led the way in scoring, adding two more goals to his already impressive four goal night, totaling six in the game, along with Baum and Cockerton netting their fourth and Schreiber scoring his second. Chris LaPierre was the rest of the offense for New York, scoring two goals in the fourth quarter, but it wasn’t enough and the Machine went on to claim victory 22-10.

With the loss, the Lizards drop to 2-1 on the season. They return home to James M. Shuart Stadium next Saturday, May 21st, to host the undefeated Charlotte Hounds. That game is set to start at 5:00 pm.