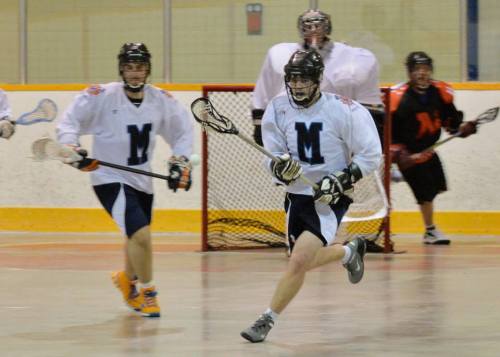 So far throughout the “Best of the Rest” series we’ve largely looked at some of the most notable players without NLL contracts. This week will change our tune a bit, and take a look at four players who definitely do not get the recognition they deserve. Defensive players and even transition players often don’t get the attention of people with their ridiculous statistics, so its important to acknowledge players who bring elite level transition and defensive skills to the table. These next four players all bring similar things to the table, they’re all dedicated, hard working competitors with a respect and love for the game that would rival any current NLL lacrosse player. This week the “Best of the Rest” series takes us out west again to take a look at two Maple Ridge Burrards and then back to Ontario to take a look at two Sr. B players with skill worthy of a higher level.

Colton Porter (T)—Maple Ridge Burrards (WLA)
Coming off his third full season in the WLA, Porter is known around the league for his high motor, athleticism and relentless effort. A player who is said to be one of the fittest players in the whole WLA, Colton can be relied upon as one of the Burrards best defenders, both in team and 1-on-1 situations. If the WLA kept a stat for forced turnovers and loose balls Colton would undoubtedly be the leader in both categories, with the only player coming close to him in those categories being his brother Zack. While considered more of a defensive player Porter is blessed with great speed, quick feet, and can be relied upon to make good decisions with the ball in transition. NLL GMs may be turned away by Colton’s size, as he stands just 5’8″ but if anyone saw the Burrards first round playoff matchup with the Burnaby Lakers, they would of see Colton excel in 1-on-1 defensive situations against the mammoth offensive threat in Tyler Digby, who stands 6’5″ and weighs around 240 pounds. Porter was able to tally two goals and five assists for seven points in 18 Regular Season appearances. In 11 playoff appearances Porter was able to rack up another three goals and three assists for six points, to go along with 38 penalty minutes. A product of the Langley Thunder Jr. A program, Porter looks poised to eventually get his shot at the NLL.

Zack Porter (D)—Maple Ridge Burrards (WLA)
Zack Porter, two years younger then his brother Colton, is coming off an excellent rookie season in the WLA. Said to be one of the most frustrating and irritating defenders in the league, Zack also excels in forcing turnovers and scooping loose balls. Like his brother Colton, Zack also approaches the game with 100 percent effort and tenacity, driving opponents insane waiting for a break that never comes. Zack was also valuable to the Burrards this season, due to his elite skill in the faceoff circle, where he more than hold his own against seasoned WLA vets, some of whom are NLL teams’ main faceoff guys. Zack is an agitating defender often getting under opposing teams top players’ skin, and forcing them into penalties. Not scared to drop his mitts, Zack was one of the Burrards best defenders throughout the regular season and was said to once again elevate his play come playoff time. Zack like his brother Colton, is on the smaller side standing just 5’7″ but the tenacity, physicality and will to win that he brings to the table should show NLL GMs that his size is not an issue. Appearing in 18 regular season games, Zack scored one goal and one assist for two points, along with 43 penalty minutes. Come playoff time he racked up another goal and two assists for three points and 22 penalty minutes. Also a product of the Langley Thunder Jr. A program, Zack may need to turn in another solid WLA season before he gets the recognition he deserves. None the less he’s trending in the right direction and should get a shot at the NLL in the near future.

Coady Adamson (T)—Brooklin Merchants (OLA Sr.B)
When you watch Adamson play, you see a player who fits the mold of an NLL player. The NLL seems to be trending towards players who can excel in both ends of the floor given the limited number of roster spots; Adamson can do that. While mainly an offensive player throughout his junior and senior career, Adamson has seen more time in a transition role as of late. A player with great size, strength and athleticism, he has become increasingly more stable on the defensive end. Adamson, fights hard on loose balls, keeps on opposing offensive players’ hands, and has the strength to body them up in 1-on-1 situations. Offensively Adamson has some of the best hands in the loop, his quick hands in tight allow him to finish with great success. He has an absolute cannon of a shot, that is as hard as it is accurate. A player with quick feet, he works the pick and roll game very well. Adamson excels with the ball in his stick as both a playmaker and scorer. Adamson spent the 2010 season with the Brooklin Redmen posting very respectable stats against elite competition—11 goals and 12 assists for 23 points in 14 regular season games—but he excelled come playoff time where he racked up eight goals and eight assists for 16 points in just nine games. In 2011 with the Redmen loading up with NLL talent on their right side, Adamson chose to move down to the Brooklin Merchants Sr. B in favour of more playing time, and he absolutely lit it up with 27 goals and 31 assists for 58 points in 13 games. In 2013 Adamson got a taste of pro lacrosse suiting up for the Brampton Inferno of the Canadian Lacrosse League (CLAX), where he appeared in eight games, scoring eight goals and 13 assists for 21 points. In the summer of 2013 with the Brooklin Merchants Adamson was slowed by an injury appearing in just seven games, though he did rack up 15 goals and six assists for 21 points in the process. At 6’2″, 195, Adamson has the size, speed and strength to compete at the highest level of lacrosse, he is a player I feel simply needs an opportunity at an NLL camp to show his elite ability.

Matt Pelkey (D)—Oakville Titans (OLA Sr.B)
Pelkey is a big, athletic defender, who likes to play a physical game. With that being said he’s not the type of defender to run around looking for a huge hit; he plays very sound defensive lacrosse. Having played offense for the majority of his lacrosse career Pelkey made the move to defense due to an abundance of left handed shots on the Oakville Titans in his rookie season, so he has the hands and offensive instincts that allow him to excel in transition opportunities. A defender who enjoys transitioning the ball up the floor, who makes smart decisions with the play and plays strong physical defense is exactly along the lines of what NLL GMs look for in an NLL calibre defender. Pelkey is player who will do whatever it takes to win, blessed with an excellent work ethic and a love for the game. Pelkey’s best attributes are his size and athleticism—he uses them whenever possible, loves to use his size and athletic nature to beat opposing players in loose ball battles and 1-on-1 situations. Pelkey will be the first to admit he could work on his finishing ability, as he often creates tons of transition opportunity with his speed and skill, with ever improving skill it’s just a matter of time until the ball starts finding the back of the net with regularity. Overall Pelkey’s great work ethic on and off the floor and willingness to learn, do whatever it takes to get better and whatever a team asks of him should endear himself to NLL GMs. This past season with the Oakville Titans, Pelkey finished the season with one goal and five assists for six points, along with 10 penalty minutes in 12 games. In five playoff games Pelkey added one goal and 35 penalty minutes. In 2013, the left shooting Pelkey got his first taste of pro lacrosse with the Barrie Blizzards of CLAX, appearing in five games, tallying one assist. Pelkey is another player who simply needs an opportunity to show his skill against NLL level talent, as he has all the attributes to contribute at lacrosse’s highest level.