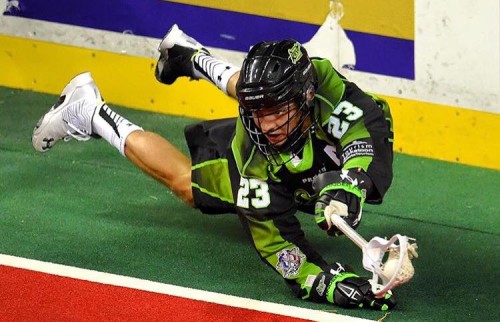 The Saskatchewan Rush have taken a 1-0 lead over the Calgary Roughnecks in their best of three Western Division Final series with a convincing 16-10 victory in front of 12,211 disappointed fans at the Scotiabank Saddledome in Calgary.

The game was a close battle until the Rush turned their play up a notch and broke open a 8-8 third period tie and outscored the Roughnecks 8-2 in the final frame.

Ben McIntosh, the sensational sophomore, led all scorers with four goals for the Rush, including an empty netter, in the fourth quarter. Curtis Dickson had three goals and two assists and Dane Dobbie also had five points to lead the way for Calgary, but it wasn’t enough to defeat the reigning NLL champions.

The game began in a scoring frenzy with five goals being scored in the opening five minutes of the game. Both teams tightened up their defence and only managed eight goals apiece to the end of the third quarter.

The win means Saskatchewan can advance for the second-straight year to the NLL championship with a win at home next Saturday. If Saskatchewan fails to win, the two teams will play a second 10-minute game immediately following Game 2 to decide the West Division Championship.

Last year’s playoffs saw the same two teams play the mini-game to decide the winner, with the Rush winning and moving on. If the series goes to the deciding mini-game, it will be the third year in a row that the teams will have done so.

Calgary face a near impossible task as the game will be played in Saskatoon in front of over 15,000 Rush fans that are known to be loud and intimidating to the opposition. Game time is 9:30 p.m. EST at Sasktel Centre and can be watched on Fox Sports in the USA and TSN in Canada.