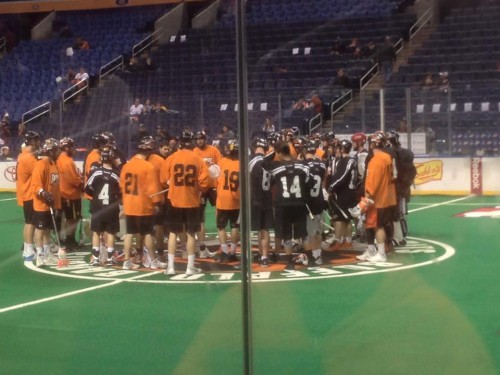 Professional lacrosse is coming back to Pennsylvania, this time, up in the Lehigh Valley area. The New England Black Wolves and Buffalo Bandits will battle in their second preseason matchup at the PPL Center tomorrow night at 7 p.m.

New England and their new Head Coach, Glenn Clark, have made some good moves this offseason, acquiring Shawn Evans and Shane MacDonald along with re-signing Kevin Crowley. MacDonald and Evans tallied two goals each in the Black Wolves preseason game win over the Nighthawks, with other goals from Pat Saunders, Kyle Buchanan, Jimmy Purves and Mark Cockerton, giving the staff a lot to be optimistic about heading into tomorrow night’s matchup versus the Bandits. Cockerton will be with the Nighthawks this season after recently signing a one year contract with them. Clark and his team will need big things from the defense and Evan Kirk this Saturday night to help get their offense going.

Buffalo topped New England earlier this month 15-8. The Bandits’ special teams were unstoppable and a great sign for them as that seemed to be their achilles heel in 2015. The Buffalo front office and coaching staff should be very pleased with their squad after their first meeting with new England. Jerome Thompson (2 G, 2A) has stepped up, along with teammates Heseltine (3G, 2A), Tyler Ferreira (4G, 4A), and Chad Culp (2G, 2A). This is a great stat sheet after losing one of the most talented lacrosse players, John Tavares, to retirement. One player who will help offensively is Daryl Veltman, formerly of Calgary (2011-2015) and Boston (2009-2010). He had 57 points alone last season and will look to build off of that with his new team.

Coach Cordingley is looking forward to his offense this season. He was happy to see five guys sharing the ball, working with each other and watches to make sure what guys are doing that are not putting up the points as he believes that’s what’s more important. “I don’t look at points. I look at how smart players are playing and positioning. You take away the points, you look at what else they do and [Tyler Ferreira] did a lot. He had ground balls, he seals real well, he saw the floor very well, he’s always moving and guys like that are hard to check,” said Coach Cordingley in his interview with Dan Pattison of ILWT.

With the first games of the season under a month away, these final preseason games will help coaches and front office staff to determine the final rosters for opening night. The Black Wolves will need their defense to stand strong against a pesky Bandits offense. Evans, Crowley and MacDonald have to get New England’s offense going.