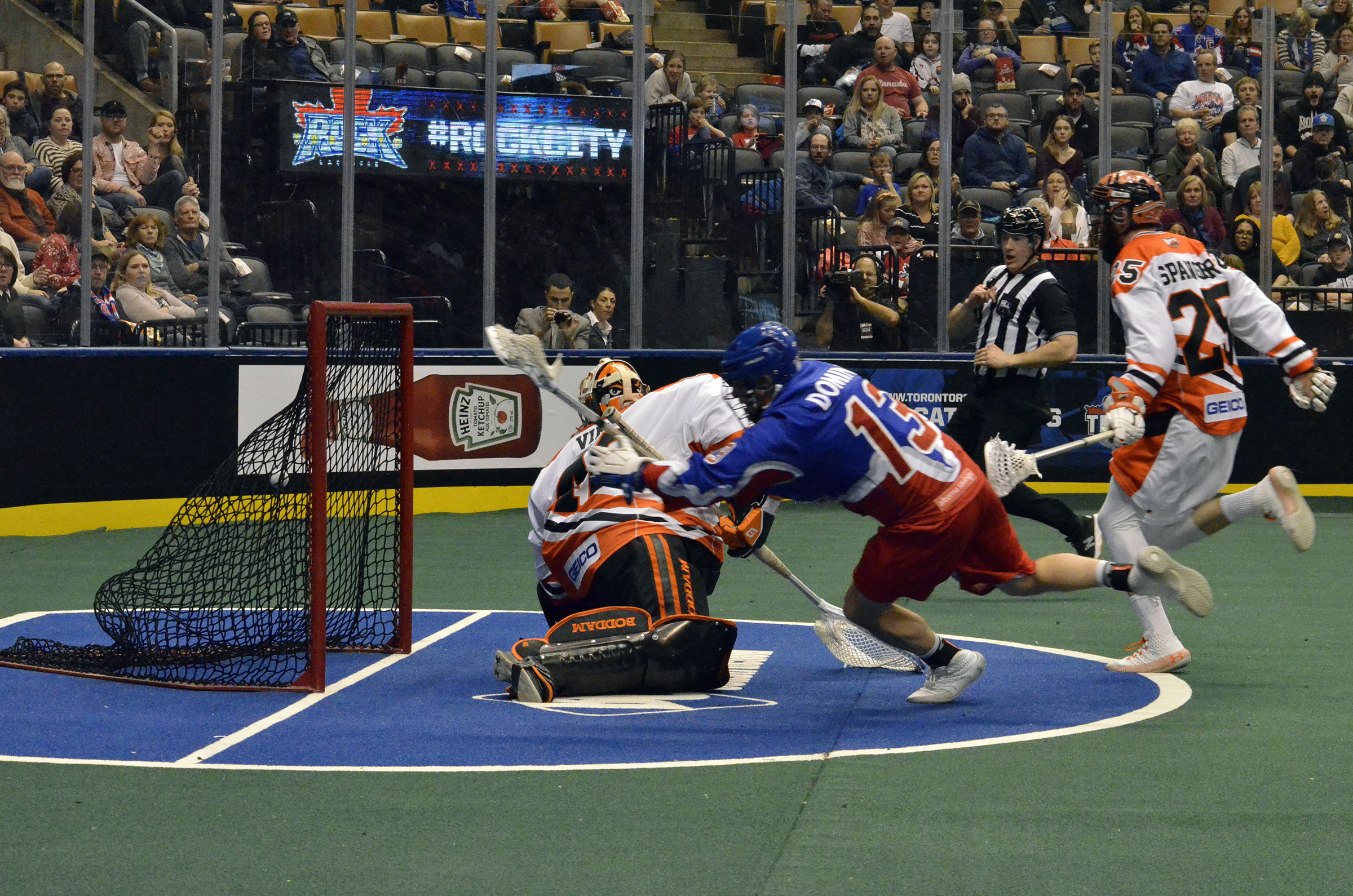 One of the fiercest NLL rivalries over the years has been the Toronto Rock and Buffalo Bandits. Coming into the latest instalment of this feud, the Rock had only lost one divisional matchup this season, that coming against the Bandits, a 10-8 loss in Buffalo on January 18th.

It was time for the tables to turn, and the Rock’s full team effort resulted in a 13-9 win on Sunday afternoon at Scotiabank Arena.

The Rock continued to see their top offensive players out due to injury including Adam Jones and Tom Schreiber. Dan Craig did return to the line up Sunday, but it came at the expense of Brandon Slade.

The injuries didn’t slow down Toronto in their previous game against Halifax, and the Rock would lean heavily on their transition players again Sunday. After Dan Dawson opened the scoring, Josh Jubenville ran the floor after strong defensive pressure from Mitch Gustavsen caused a turnover. Rob Hellyer would stretch the lead to three (one of his three on the night, including the 200th of his career), but overall Toronto struggled to solve Matt Vinc or his posts, as they found iron twice. Buffalo would finally solve Nick Rose when Ian MacKay scored with a minute and a half left in the quarter, followed less than 20 seconds later by a leaping goal by Josh Byrne. While Buffalo would take momentum into the second, they’d still trail 3-2 after one.

The floodgates would open after a brief period of back-and-forth defence to start the second. They traded goals twice, including a Reid Reinholdt marker that Dawson would assist on to mark the 900th of his career. Buffalo would respond with two, with Dhane Smith walking in off the faceoff and a Chris Cloutier crease dive. Out of the official’s timeout, Toronto would put together a three-goal run of their own, only to be answered by Smith and, eventually, Byrne. In all, 11 goals were scored in the second quarter, and the score was tied at eight at halftime.

The scoring cooled off in the third, however, as the heated rivalry fans have come to expect picked up with gritty defence and physical contact taking the spotlight. David Brock, who stayed up on offence at times, scored for the second straight game (giving him a three-game point streak). His goal was the only one of the frame, giving Toronto the lead back entering the final quarter.

Nick Rose credited the Rock defence for the turnaround saying, “That was probably our best defensive half of the season. We didn’t allow them inside as much as we did in the first.”

After Scott Dominey opened the fourth with a transition goal, Hellyer and Dawson connected on goals by each other to extend the lead to four. Rose became a story in this game stopping all 17 shots faced in the third quarter, and stopping eight of nine in the fourth for 29 scoreless minutes.

Rock head coach Matt Sawyer joined Rose in praising the defence commenting, “We know our defence is really good, it’s the strength of our team.”

Matt Gilray was the only one to beat Rose in the half for his second transition goal of the game. Brock scored his second of the night into the empty net to cap the win.

The Rock will return home Saturday night to face the Vancouver Warriors, who split their two weekend games losing to Buffalo on Friday, while defeating Rochester in overtime Sunday. The game will be Toronto’s second in the Alterna Cup, the newest NLL trophy awarded to the team with the highest win percentage amongst Canadian teams. Toronto currently leads the Alterna Cup standings with a perfect record thanks to their victory over Halifax last weekend. Vancouver’s loss to Calgary on opening weekend sees them at the bottom of the ledger. Game time on Saturday night is scheduled for 7 p.m.