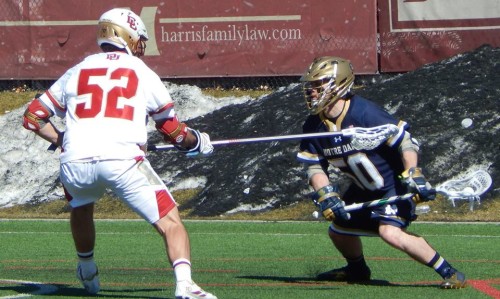 If there were ever a game as weighted as Denver and Notre Dame this weekend, it was last year’s semifinal match up between these two power houses. Notre Dame lost to Duke in the 2014 Championship, and again to the Pioneers in a semifinal thriller that included a late comeback down to the wire, taking the game to sudden death overtime where Denver stole the show.

The Irish are hungry this season, coming in ranked No.1 in the majority of polls with an undefeated record of 4-0. Last week, Notre Dame sealed a defensive battle against Maryland with a 5-goal fourth quarter.

“That was an old-school game. It was physical right from the first whistle. Both teams were really well-prepared and played great defense, and it just made it difficult to generate much offensively.” – Irish coach Kevin Corrigan.

Matt Kavanagh continues to draw media attention, which should most certainly concern DU considering he’s only third on the team’s season stats, scoring at a percentage of .176. The real offensive thrust behind the Irish this season seems to be coming from Sophomore Mikey Wynne who has 13 goals and one assist to average a .565 scoring percentage.

Notre Dame’s defense continues to hold it’s ground as consistent performers. Holding an opponent to 4 goals is no easy task and Junior Shane Doss has a .655 save percentage.

This is a perfect match. No.1 hungrier, No.2 better track record. Both coming in with strong midfields and stronger defensives. Both with attention-grabbing attack.

Trevor Baptiste continues to own the face off game against opponents. He just went 21-28 in the overtime thriller at UNC and has gone 89-125 so far in 2016. Zach Miller and Connor Cannizzaro had spotlight stealing performances in Chapel Hill with the takedown of the Tar Heels, and Nate Marano has 8 points on the season.

Taking face off for the Irish is P.J. Finley, who’s win percentage at .623 is just under that of Baptiste at .712. It is still close enough to make a fight.

The Pio defense maintains its efficiency but had a real hard time against UNC as the Tar Heels shut down a number of clears and forced DU into uncomfortable positions all day. Alex Ready is doing well for a freshman in goal, and obviously has the support of Tierney and the team, but shows signs of inexperience in certain scenarios.

With a player like Sergio Perkovic holding down midfield for the Irish, his body size can be enough to impact an inexperienced goalie like Ready, and his shot will dost certainly have impact.

Both teams have only had one true test this season: Denver against UNC and the Irish against Maryland. This is the true evaluation of their respective 2016 seasons.

The winner of this game will gain spotlight, keep their season clean of losses, and hold the No.1 ranking in the NCAA. The question at hand for either team is: Is Denver ready to sustain a streak-ending loss with arguably one of the best rosters? What will the future hold for Notre Dame if they take an early season loss with the last two seasons on their minds?