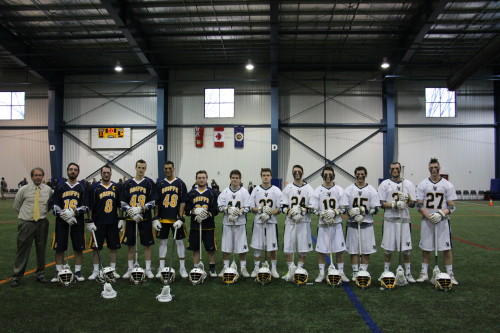 An early season lacrosse tilt between the Canisius College Golden Griffins (Buffalo, NY) and the University of Vermont Catamounts (Burlington, VT) had a distinctly Canadian vibe to it. While seeing the names of Canadian athletes and coaches on NCAA rosters is not uncommon nowadays, something groundbreaking took take place during the game on March 9, 2016. For the first time in NCAA Division I lacrosse history, a game was played on Canadian soil when the Civic Recreation Complex in Oshawa, ON hosted these two US teams.

A large crowd, made up of family, friends, and future college lacrosse hopefuls, was on hand to watch Canisius College cruise to an 11-5 win over the University of Vermont. A quick start by the Golden Griffins, who scored 8 goals in the first half, made it tough for the Catamounts to catch up. Leading the way for Canisius was sophomore Connor Kearnan (Courtice, ON), who tallied 5 points (3 goals, 2 assists). On the other side, the University of Vermont had three Canadians make the score sheet, with Cam Milligan (Peterborough, ON) counting a goal and an assist, and both Ian MacKay (Port Elgin, ON) and Braiden Davis (Orangeville, ON) finding the back of the net as well. With his fourth quarter marker, Mackay, who was a member of Team Canada for the 2012 U19 World Championship, extended his point streak to 34 consecutive games.

While a field lacrosse game in early March might not be common place in most Canadian cities, the leader of one NCAA lacrosse program saw an opportunity. Ryan Curtis, head coach of the Vermont Catamounts, was the driving force behind bringing the game north of the border. “The idea for the game came up as we were getting ready to plan our spring break trip” said Curtis, who is entering his 10th season at the helm of the Catamounts. “Traditionally we have gone down south, but over the last three years we’ve had winter weather severely impact our trips.” Instead of trying to escape the frigid winter weather, Coach Curtis chose to embrace it, explaining “I thought about going somewhere north that had indoor fields so the weather couldn’t impact us. The more I thought about it, the more it made sense. We have been recruiting in Canada a lot for a few years now, so this seemed like a great opportunity.”

With a concept in place, he approached his counterpart from Canisius College to pitch him the idea. “Coach Curtis had reached out to me with the idea of potentially playing a game in Canada” said Randy Mearns, head coach of the Canisius Golden Griffins. “He said they were coming back from Michigan and asked if ever we would be interested in trying to set up a game in Canada while they were coming through.” Mearns was intrigued with the idea, but wanted to know more before agreeing to make the trip across the border with his squad.

With a lot of unanswered questions – would the game be played outside, what would the weather be like, was there an indoor facility that we could play in – Coach Curtis set out to iron out the details and turn his concept into reality. “He [Coach Curtis] did a lot of the leg work, trying to figure out where we could potentially play considering the game would be held in March,” admitted Mearns. “Once it was determined that we could play in Oshawa at the Recreation Civic Centre, we were on board.”

The game was a homecoming of sorts for many of the athletes taking the field. A total of 12 players from Ontario and Quebec participated in the match, with many of them getting a chance to play in front of family and friends for the first time since they made the jump to college. It’s an opportunity that Coach Curtis was quick to recognize, saying “I know our Canadian players, and their parents, are excited about this game. It’s not easy for some of them to catch a lot of our games in the States.”

The list below features each of the Canadian-born players that are currently on the roster for each of the teams participating in the game. For additional information on these players, click on their school’s name to visit the athletic department website where you will find a detailed biography and statistics.

Eric Gold A Keswick, ON The Kiski School

The trip north was also quite meaningful for Coach Mearns, a native of St. Catharines, ON, who still has family in the area. The former Team Canada player and coach saw this game as a chance to give back to the local lacrosse community that has given him so much. When speaking about bringing the game to Canada, Coach Mearns described it as “an opportunity to do something unique and special, and in some sense give a little bit back,” later reaffirming that the moving forward with the idea was “a no-brainer.”