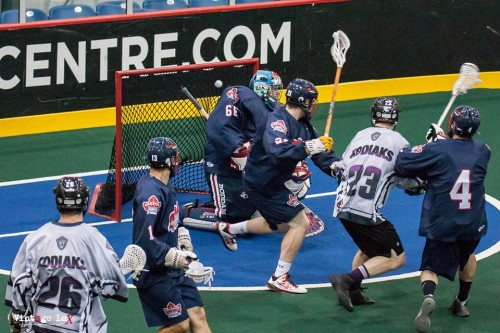 The Oakville Rock’s roster, on paper, looks pretty good. They added Wes Berg from the west, even. But despite these facts, they started the season with seven straight losses. Last night they finally reached their first victory of the 2015 season.

Just days after Matt Sawyer took over as the new head coach of the team, results finally showed on the box score. Oakville defeated the Kitchener Waterloo Kodiaks 14-8 on Sunday night.

Oakville scored five straight goals from five different players after going down 1-0 early in the first period. They went up 9-2 in the second and never looked back.

Kitchener Waterloo additionally have been in a slump since they traded Ryan Benesch to Six Nations, losing four of their last five games.

With the monkey off their back now, Oakville can focus on trying to get back into the Major Series Lacrosse race. With the Kodiaks struggling, the Rock have a fighting chance.

“I’m glad to be able to help them,” said Sawyer to TheRecord.com following the game. “It’s good for our guys to get that feeling of finally winning.

“All the guys make sacrifices to be here playing in the summer so it’s important to have a little bit of fun while we are doing this.”