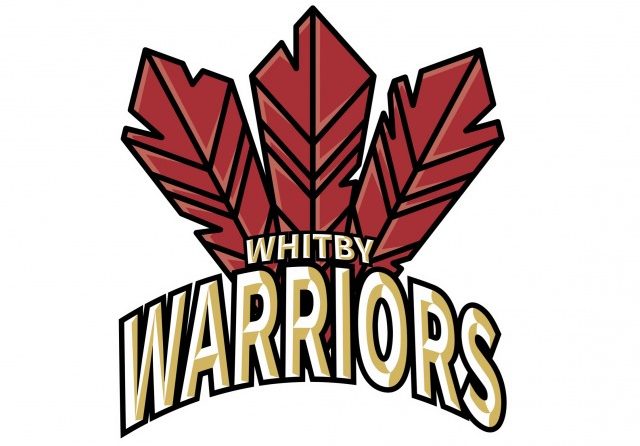 The Whitby Warriors picked up their first win of the 2018 Ontario Jr. A Lacrosse League season on Monday night with a 12-5 win over the Peterborough Lakers at the Memorial Centre.

It was Peterborough’s first game of the season, while Whitby was coming off an 8-4 weekend loss to the Mimico Mountaineers.

A couple of things sparked Whitby’s dominance in the game – first, the traditional Peterborough/Durham Region rivalry got everybody excited for the game, and tensions boiled over in the third when Tyler Stinson fought Brad Lyons.

But it was the addition of Tanner Cook and Brock Haley to the Warriors’ lineup that was the real difference. The two combined for nine points, with Cook scoring five goals including a penalty shot.

“They had great games,” Warriors head coach Shawn Williams expressed. “Tanner Cook just returned from UNC and he picked up right where he left off last year. He led he way and led our team and just did his job.”

Haley will split time between the Warriors and Jr. B Clarington Green Gaels for now, but Williams said the Warriors will assess the situation and see if they can keep him full time.

“He’s one of those guys that’s huge on our radar,” Williams said.

Joel Watson started in goal, giving Brett Dobson the night off. Watson played for the Toronto Monarchs of the Arena Lacrosse League in the winter, earning a 2-1 record as a backup on a team with many older and more experienced players. Watson made 38 saves and proved that he’s comfortable handling the ball, chipping in two assists on fast-break goals.

The Lakers scored first, with Trevor Kennedy getting the home team on the board at 5:11. But Whitby rattled off four goals in a row, including two from Cook, to lead 4-1 after the first period.

After an empty scoring stretch of 12:25 Dyson Williams increased the Warriors’ lead to 5-1. The Lakers fought back with goals from Zach Young and Adam Kitchen, on a power play, but trailed 5-3 after two periods.

The Lakers graduated a large number of players last season and were without several more regulars at school or injured, so had a lot of affiliated players in their lineup. They finished 10th out of 11 teams last season.

“Likewise, we had a young lineup; we had 10 call-ups,” said Williams, whose Warriors finished fourth in 2017. “They’re fighting for a spot, everyone is. It’s all new and they want to be here late in August as well. We just have to take care of us and I though we did that.”

Haley and Kitchen traded goals to begin the third period, but the tide changed when Cook scored on his penalty shot. It was the first of five goals in a row for Whitby. Cook scored three times in that span. Haley’s second goal of the game, the 11th for the Warriors, was the prettiest, as he tossed a Shawn Evans-like behind-the-back goal past Lakers’ goaltender Landon Kells.

The Lakers pulled Kells with over five minutes left and scored once, but Dyson Williams dashed any hopes of a comeback with an empty net goal soon after.

Kells made 35 saves in the losing cause.

The Warriors are right back in action tonight, hosting the Orangeville Northmen at Iroquois Park Sports Centre in Whitby. The Lakers visit the Toronto Beaches on Thursday evening at Ted Reeve Community Arena.