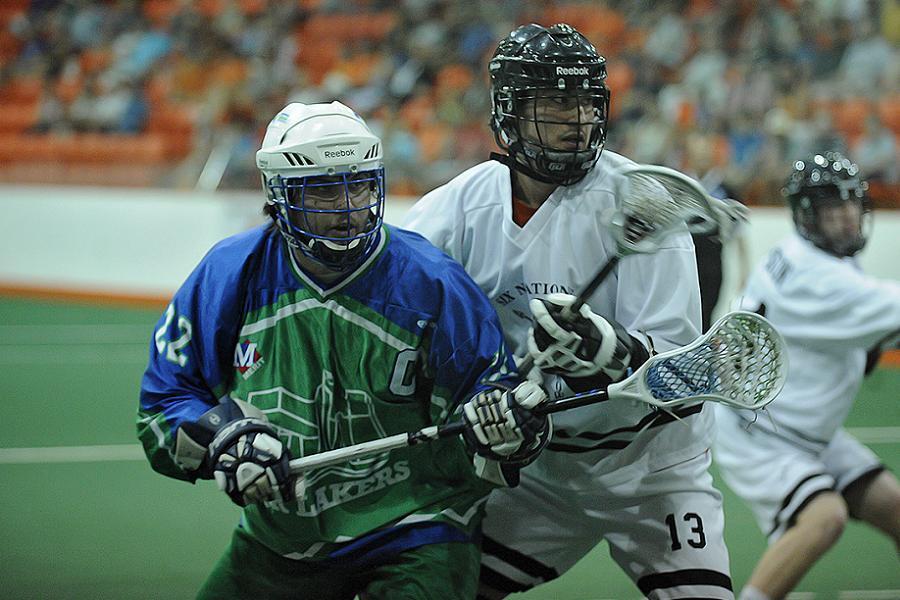 The OLA Junior “A” Finals are set to kick off on Sunday evening in Six Nations, as the top seeded Arrows will take on the second seeded Peterborough Lakers, in what is expected to be one of the most hotly contested Junior “A” finals in years. After a 2015 regular season that saw tremendous parity throughout the league, the playoffs have been much more predictable as the top two seeds have made their way to the finals with relative ease. The top seeded Arrows made quick work of both the Burlington Chiefs and Whitby Warriors, while the Peterborough Lakers had just a single hiccup along their way to the finals, dropping just one game in round 2, to the Brampton Excelsiors, after sweeping Barrie four games to none in round one. While there was tremendous parity throughout the regular season, the Six Nations Arrows and Peterborough Lakers set themselves apart from the rest of the field all season, using their tremendous depth of skill to beat teams in various ways. Both teams now face their toughest task of the season, as the teams match up extremely well against one another, boasting a ton of skill up front, physical and skilled defenses and sound goaltending. With no disrespect to the BCJALL or the Alberta Jr. A league, the victor of this OLA Final will likely find themselves hoisting the Minto Cup in late August.

When the Six Nations Arrows and Peterborough Lakers take to the floor on Sunday evening at the Iroquois Lacrosse Arena it will mark the two teams fourth straight playoff match up and first finals match up since the Arrows knocked off the Lakers four game to one during the 2006 season. As we all know the Lakers went on to capture the Minto Cup in 2006, with a 9-5 win over the Arrows, as current NLL stars Shawn Evans, Aaron Bold and Kyle Sorensen out dueled the likes of Cody Jamieson, Sid Smith and Craig Point. However since that 2006 Minto Cup loss, the Arrows have dominated the Lakers in post season play, going 12-5 while defeating them the past three seasons in the second round of the OLA Junior “A” playoffs. With that being said, this is the first season since that 2006 Minto Cup win for the Lakers where they have a team that can compete with the Arrows both on paper and on the floor. This season the two clubs split the season series, with each team claiming victories on their home turf. However its important to note that the Arrows win over Peterborough came in their season opener, with many players from both teams missing. While the season series was indeed split 1-1, the lineups will see from both teams during the OLA finals are dramatically different then the ones we saw in the Arrows season opener.

Kicking off the breakdown of the OLA finals, will look at both teams potent offenses. When you look at the Arrows offense you realize just how deep and talented they are. They can hurt you on so many levels, they have guys who can beat you individually, they have playmakers, goal scorers, guys that crash and bang but most importantly all of players they trot out on offense can play as a team. The Arrows move the ball very well, making it extremely difficult for defenses to get set, they work the pick an roll very well and have arguably the most potent power play in Junior Lacrosse. Leading the Arrows offense is 17 year old scoring sensation Austin Staats, who led the Arrows in regular season scoring with 91 points, and currently leads them in playoff scoring with 39 points. Staats has found an even higher level of play this post season, as he at times through a very deep and talented Arrows offense on his back in their second round series against the Whitby Warriors. Following closely behind Staats is Captain Brendan Bomberry who looks to add yet another national title to his trophy case, after claiming an NCAA Division one field lacrosse championship this past year with the Denver Pioneers. Bomberry is extremely smart in possession and boasts tremendous floor vision, an excellent leader Bomberry thrives in high pressure situation. He has the ability to beat you inside, outside, as a playmaker or as a scorer, if the Lakers want to claim the OLA title they need to limit Bomberry. James Rahe has come in from the BCJALL and added yet another element to the Arrows offense, as the hulking veteran threat has shown the ability to beat goaltenders with his rocket off an outside shot or inside with defenders draped all over him. Rahe is extremely good on loose balls, and uses his size to his advantage extremely well. Jordan Durston, Ryan Lee and Jackson Reid round out the regulars on the Arrows offense, and all boast potent offensive ability, while Lee and Reid are hard to contain boasting excellent hands and foot speed, Durston can beat you in a number of ways and his size and strength coupled with his excellent outside shot and quick hands in tight make him a lethal offensive threat. With Joe Maracle nearing a return, the Arrows will only get deeper offensively, while the likes of Dallas John and Tehoka Nanticoke also provide excellent offensive depth.

After reading just how deep the Arrows are offensively, one would have to assume know team could match up with that type of depth and skill, however they’d be wrong, as they Peterborough Lakers boast an offense just as effective as the highly skilled Arrows. Led by fourth year star Cam Milligan, the Peterborough Lakers offense trailed the potent Arrows offense by just five goals in the final goals for statistic, boasting six players with over 40 points, not including Holden Cattoni who returned from school late in the season. There is no question the Lakers offense runs through Milligan and Cattoni, as Milligan produced 98 regular season points and currently sits third in Lakers post seasons scoring with 28 points, while Holden Cattoni has torn up opposing defenses this post season to the tune of 42 points in just nine playoff games. While it may be easy for the Arrows defense to key in on the two offensive studs, the Lakers “depth” guys have the ability to break out offensively as Kyle Killen, Jake Fox, Zach Bryant, Zac Currier and Ethan Walker all broke the 40+ point plateau during the regular season, and have all continued to produce throughout the post season. When you throw in the likes of Dan Michel and Junior B call up, scoring stud Fred Hartley, the Lakers are just as deep offensively as the Arrows, they simply lack the “Big Name” guys that the Arrows posses.

On to the defenses, the Arrows boast a quick, physical and athletic defense, that is both intimidating and able to stay out of the penalty box, which gives opponents nightmares. The Arrows rarely allow the opposition to get inside without a supreme effort and on many of nights that play is enough to limit opposing teams to very few quality scoring chances. The Arrows top defenders in Leo Stourus, Marcus Elvin, Greg Longboat and Kellen LeClair showed the capability to shut down the OLA’s leading scorer in Austin Shanks and a very talented Ryan Keenan in the OLA Semi’s, which was a big determining factor in the Arrows ability to sweep the talented Whitby Warriors in Round 2. With the additions of AJ Kluck, Keegan Letourneau and the solid play off Ryan Dilks and Timmy Johnson the Arrows defense is extremely tough to crack and should be able to handle the offensive depth of the Lakers, however they did show a slight tendency to get beat when the opposition moved the ball quickly.

Meanwhile the Lakers are no slouch on the back end themselves, as despite some of the numbers, they may possess the best team defense in the OLA Junior “A” loop. Led by Thomas Hoggarth, Bryce Sweeting, Tyler Roche and Riley Campbell, the Lakers to are a physical and intimidating bunch that can run the floor and physically ware you down. While Peterborough chose to not add to their back end prior to the playoff run as the Arrows did, the likes of Dylan Hutchinson, Jordan Stouros and Parker Sands have really stepped up their play throughout the playoffs, allowing the Lakers defense to excel at times throughout the post season. While the Lakers did give up 40 goals in a three game span during round two against the Excelsiors, when playing with consistency the Lakers defense is a tough nut to crack, they’ll need to find that consistency in the OLA finals if they want a chance to play for the Minto Cup for the first time since 2006.

In goal is where we find the most glaring advantage as the Six Nations Arrows possess the best goaltender in all of junior lacrosse in Dougie Jamieson. Jamieson currently possesses a 5.25 Goals Against Average and a 0.857 save percentage along with an 8-0 record through two rounds of the playoffs. Those outstanding numbers are nothing new to Arrows fans as Jamieson also led the OLA in Wins, Goals Against Average and Save Percentage throughout the regular season. While Jamieson does have an elite defense in front of him, he is as skilled as they come and really picks up the Arrows when they do go through bouts of inconsistencies or have momentary mental lapses on defense. Simply put, Dougie Jamieson is the best goaltender in Junior Lacrosse and has the ability to win games on his own. Meanwhile Brett Lafonte of the Peterborough Lakers is no slouch himself, however in this conversation he’s the clear cut underdog. Lafonte picked up 12 regular season wins for the Lakers while maintaining a 8.56 goals against average, good for 5th in the league. His playoff numbers are even better going 8-1 with a 8.19 goals against average, however his save percentage has dropped dramatically from .737 during the regulars to .561 during the playoffs. The Lakers may be able to score with the Arrows, they my possess an equally as talented defense as the Arrows, however Jamieson holds a big advantage in goal over Lafonte, and advantage that may ultimately be the difference in this series, unless Lafonte can step his game up set another level and steal a road game for the Lakers.

While this series is set to be one of the most highly anticipated OLA finals in some time, the Arrows may simply be to much for a very deep and talented Peterborough Lakers squad. The Arrows have everything going for them right now, and look poised to capture their second straight OLA Junior “A” Championship.