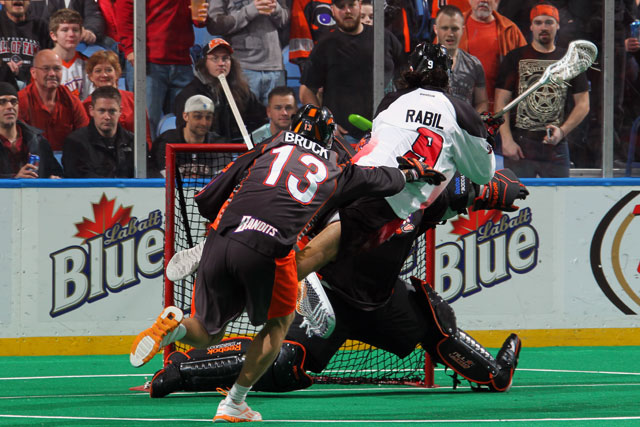 It looked like Paul Rabil might have been making his return to the National Lacrosse League in 2017, but it was not to be.

Today it was announced the Toronto Rock had placed the transition player on the protected player list. Rabil, who last played with Philadelphia, will play just Major League Lacrosse this upcoming season with the New York Lizards.

“Unfortunately at this time, it’s still not going to work,” said Rock GM and owner Jamie Dawick in a press release. “We’ll see what happens going forward, I know there’s interest on his end and obviously there’s interest on our end. The communication lines have been open between him and myself and he’s going to continue to speak of the Toronto Rock off the floor and we’ll see what happens in the future but unfortunately for the 2017 season we’re not going to get a chance to see him on the floor.”

Rabil cited the two league overlap as the main reason for not returning to the indoor game.

“Unfortunately, the 2017 season will not be that time,” said Rabil. “In October, I signed a two-year deal with a three-year option, with the New York Lizards of Major League Lacrosse. Included in the deal is a marketing addendum that commits me to offseason activities, which with the current NLL and MLL scheduling overlap, will restrict my ability to play both. I’m proud of where both the MLL and NLL are headed, and hope to continue to participate and bring awareness to both leagues. In the future, I hope to be a part of the Toronto Rock organization on the floor, at one of the most storied arenas and in front of one of the best fan bases in the world. For now, Jamie Dawick and I will continue to communicate and I plan on being a part of the organization off the floor.”

The Rock have been the most active NLL team in signing MLL players, adding Connor Buczek, Kieran McArdle, and Tom Schreiber to the roster this offseason. It remains to be seen if they will have a chance or choose to crack the roster.

Over his five year NLL career, Rabil has 161 career points in 68 games. His best year came in 2011 with the Washington Stealth where he posted 44 points.