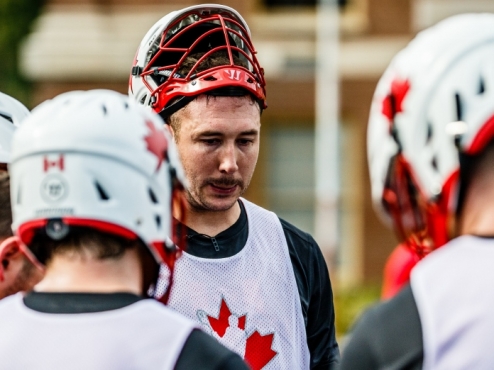 OTTAWA, ON – Canada’s coaching staff have trimmed the senior men’s national team player pool by a dozen, leaving 34 players on the training roster and in contention for the squad that will compete at this summer’s 2018 FIL Men’s Lacrosse World Championships in Netanya, Israel.

“It has been a difficult task to get to this point, but we feel confident that our national team training roster checks all the boxes required for us to achieve our collective goal – win a gold medal at the 2018 FIL World Championships,” said head coach Randy Mearns.

The coaching staff – comprised of Mearns, Matt Brown, Taylor Wray, Merrick Thomson, Mark Miyashita and Jason Levesque – evaluated forty six players during a selection camp and a series of split squad exhibition games against NCAA opponents held in Buffalo, New York this past October. Players that were not able to attend the camp, due to injuries or other commitments, were also considered for a roster spot.

“This process has been a challenging, yet exciting journey of analysis, evaluation, discussions and debates for our staff,” added Mearns.

A number of national team veterans remain in contention for the team, including 13 players from Canada’s 2014 world championship squad that defeated the U.S. to capture gold.

A group talented younger players, including seven active NCAA athletes and six who graduated from college in 2017, are also competing for a spot on the team.

Tre Leclaire, Ryland Rees, and Jeff Teat, who were all members of Canada’s 2016 U19 silver medal squad, are joined by notable names such as Connor Fields, Joel Tinney, Matt Gilray, and Ian MacKay. The trio of Josh Byrne, Jack Withers and Zach Currier, recent NCAA standouts and last year’s top three NLL draft picks, are also in the running.

“We are eager take the next step in our process with this talented, motivated and athletic group of team-first athletes,” added Mearns.

Moving forward, collegiate and professional performances, as well as injuries, will all be taken into account before the final 23-man roster is announced prior to the world championship in July.

Below is the list of the players still in contention, in alphabetical order of last name: