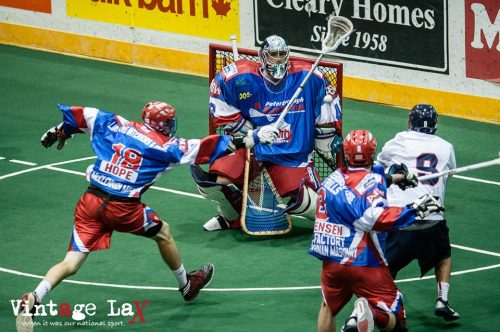 Paxton Leroux is a hockey player who played lacrosse as part of his offseason conditioning, and just so happened to have it pay off for him. He was undrafted and released by the New York Rangers after their 2014 training camp and is currently with the Minnesota Wild ECHL affiliate, the Quad City Mallards where he has played one game with 5 penalty minutes. In junior hockey, he played for the Kitchener Rangers and the London Knights, going to the Memorial Cup with the Knights in 2013. In hockey, he is a left winger.

The Swarm took notice of his work as a defenseman for the Peterborough Lakers of the OLA Jr and drafted him 4oth overall in the 2014 entry draft. A swap was made with New England for the 40th pick which traded away Jay Card. Throughout 20 games in Juniors, he had one goal and one assist. His penalty minute high came in 2013 with 91. He also played in five playoff games with the Lakers in 2013.

Leroux is no stranger to competition which should serve him well with the Swarm, especially down the stretch as the road gets tougher, and every game matters more. A Google search or You Tube search for Paxton Leroux brings up a large number of fights as a result; Leroux is a tough cookie. Under the tutelage of captain Andrew Suitor, he should do well.

The only decision left for Leroux is his: come December, does he stay in the ECHL or move over to the NLL?