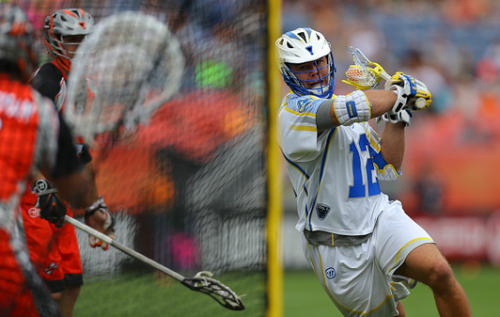 Last season the Florida Launch recorded their second straight 5-9 season. The Launch continue to remake their roster after making the move from Hamilton last year. The attack unit leads the Launch but there are still plenty of holes on this roster moving forward. As the offseason begins, the Launch made the first of many moves to change the roster by cutting down the roster to 23 players.

Here is a list of the players the Launch kept and what it means for them going forward.

This is far and away the best part of the roster and the best attack line in the entire MLL. Casey Powell had a down season in 2015 with 34 points. That came a year after putting up 63 points and being named MLL MVP in 2014. However, that had more to do with the addition of Lyle Thompson, the No. 1 overall pick in 2015 and Kieran McArdle’s emergence as the team’s No.1 option. McArdle recorded a career high 65 points which was second in the MLL behind New York Lizards attackman Rob Pannell. McArdle’s sophomore season resulted in him finishing third in the voting for the MLL’s Offensive Player of the Year award.

The threat of McArdle, Thompson and Powell on attack and the ability to rotate Myles, who is one of the better finishers in the MLL, results in a stacked attack unit that will give opposing defenses fits.

The midfield is the weak point of this roster. The unit is led by Steven Brooks who had 30 points which was good for fourth on the team behind Powell, Lyles Thompson and McArdle. However, there is a dropoff in production from there.

The Launch have a young core of players in Chad Tutton, Joe LoCascio and Connor Buczek. Buczek and LoCascio were two of the top midfielders in college in 2015 and Tutton was no slouch himself.

Buczek was the No. 2 option at the midfield after recording 19 points in eight games. Both LoCascio and Tutton had limited production during their rookie season, however, they also played only a handful of games. Both should improve and at worst, provide a really nice second midfield unit. LoCascio has the ability to break down his defender and has a deadly shot from the outside. Meanwhile, Tutton is a very nice finisher who could really shine offball as he finishes some easy passes from a bevy of talented passers at attack.

While Roman Lao-Gosney had his best MLL season and rounds out the first midfield after recording 17 points last season, the rest of the midfield is a below average unit as Miller, Cameron Lao-Gosney and Earl have all played sparingly in the MLL and will likely be replaced either through the supplemental or MLL draft.

Mattes had an ok season facing off for the Launch as he won 49 percent of the faceoffs he took. On the other hand, Croonquist won 34 percent of his faceoffs in limited action during his first year in the MLL. It will be interesting to see if the Launch stay with either of these two players moving ahead as both players are not getting it done at the faceoff X. However, seeing as the 2016 MLL Draft class is a very weak at the faceoff position, it’ll be hard to upgrade here.

Overall this defensive unit is very solid. The Launch are led by Tucker Durkin after he finished the 2015 season with 28 ground balls and three points.. He was also third in voting for the MLL’s Defensive Player of the Year award and was named to the All-MLL team in 2015. Durkin is a physical, shutdown defender and eliminates the opposition’s No. 1 option at attack.

Additionally, Ricci is a groundball machine as he led the entire team with 57 of them in 2015. He doubles as a very solid defender as well. The combination of Ikeda, Frazier and Lawrence gives the Launch a young and talented core down low. Lawrence and Frazier were third and fifth in ground balls on the team. Ikeda will be a really nice piece for the Launch at LSM while Lawrence is a pretty solid takeaway defender down low.

The defense is young and could develop into one of the better units next season with another year of seasoning under their belts. Keep in mind, this unit helped the Launch kill 79.5 percent of the opposition’s man up opportunities which ranked second in the MLL.

The Brett Queener era may be over for the Launch and they may need to seriously look at replacing him with Kaut or another option. Queener ranked last in the MLL with 122 saves, sixth in GAA (13.63) but second in save percentage (.587). However, he played almost 300 less minutes than every other goalie in the MLL that played the entire season. The Launch were 2-5 with Queener in net and 2-1 with Kaut in net. Kaut is a very nice goalie who takes up a lot of the net and was one of the best goalies in college just a couple seasons ago.

The Launch are a couple pieces away from being a really interesting team in 2016 and most of their work in the offseason will likely come at adding weapons at the midfield. They need one or two more options at the midfield on offense and a couple tough defensive midfielders who can help improve a defense that gave up 197 goals last season which was ranked third worst in the MLL.