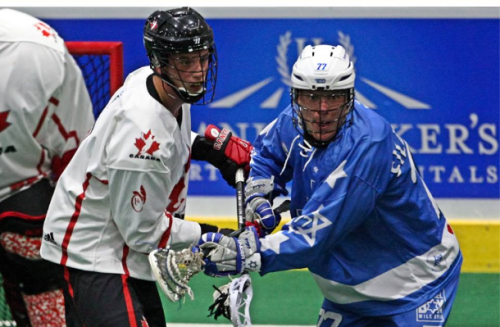 One of the hardest working members of Team Canada is a man you’ll never see on the floor during a game. He’s too busy behind the scenes making sure everything runs smoothly: that the players have their clean and correct uniforms; that their sticks are taped just so; that if any problems arise during a game they are fixed quickly.

That man is Paul Wade, one of Team Canada’s equipment managers at the World Indoor Lacrosse Championship. At 31, Wade has been involved with the game since he was a teen, starting out playing field lacrosse in high school. This is his fifth time representing Canada, and counts working with the Toronto Rock as Game Day and On Floor Director and the Brooklin Redmen as equipment manager among his regular duties.

“It’s a dream come true working with the Canadian box team,” Wade says. “I have a lot of pride and respect for the Canadian national summer sport.” 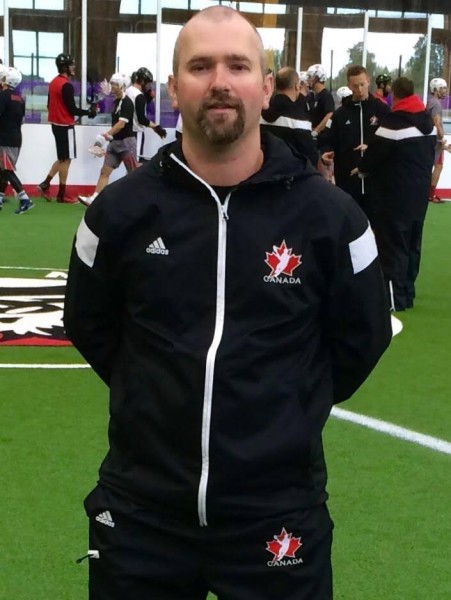 Although he has prior international field experience, this is Wade’s first time working with the Canadian box team in international play.

“I was part of the last Heritage Cup game in held in Montreal in 2013 where Canada prevailed over Iroquois Nationals but this is two years later and anything can happen in a game of lacrosse which makes the game exciting. I had to apply for this team and they selected me for the assistant equipment manager position.”

Wade says that he got his start by just putting himself in the running.

“I wanted to expand my experience and learn as much as possible working with the game of lacrosse with equipment so I went out to a Team Canada tryout camp in 2005 to volunteer,” he remembers. “I did anything and everything that was asked of me and the rest is history. I’ve been involved with the national senior men’s and under 19 teams since. I worked with the senior men’s 2006 world championship field team, which was a historic event with Canada winning for the first time since 1978.”

That tournament was really special, getting to visit a country with a whole new language and culture.

“Every team gives you a different memory, there are always better ones when you’re on the winning side,” he chuckles. “The friends you make along the way are pretty neat, especially from other countries, sharing the sport for which you have a passion.”

Wade is an Oshawa native who holds diplomas in both Rec and Leisure and Sport Management. He started working with the MSL’s Redmen at age 19 for a college placement. His main job was to help the Board of Directors with fundraising but he discovered a knack for fixing equipment like helmets and sticks.

Bill Greer, a defender for the Rock and Team Canada alumni 2011, was a couple of years ahead of Wade in high school and started a team and asked Wade to play.

“I was fast but lacked the stick skills as a player but I knew and understood the game from watching growing up,” Wade says. “My mom’s side of the family has been involved in Brampton area lacrosse, my great Uncle won Mann Cups, and many cousins all played as well, so lacrosse has always been a big part of my family.”

“I really enjoyed working with the Redmen, preparing for games and fixing the equipment, so I also helped out the Warriors part-time till 2010. When Canadian coach Derek Keenan asked me to come on full-time with the Warriors, I jumped at the opportunity and was there for four years. This past season I returned to the Redmen as the equipment manager. My hobby turned into a passion. I can help out these great athletes so they don’t have to worry about the small stuff before games and they can focus on what job they have to do on the floor.”

Wade is loving his time with Team Canada although the job keeps him very busy.

“We have shoot arounds in the mornings, lunch and some laundry to be done with head equipment manager Ted Cordingley, then a bit of free time before the game,” Wade describes a typical day at the tournament. “As a team we took in a Syracuse University game, which was really exciting to see live.”

As for game time, “seeing the maple leaf when you hand out the jerseys to the guys feel pretty cool,” he says. “It’s always exciting to see the team come together at the world championships and sometimes you have to sit back and just take in the moment.”

Right now Wade is enjoying learning as much as possible about the game, and he says coaching could be in his future.

“I’ve learned so many different tricks of the trade from so many great guys over the years. I feel there’s always something new to learn,” he said. “I may slide over to coaching minor lacrosse. My nephew is three and he already has a lacrosse stick in his hands so it would be fun to coach him in minor lacrosse.”

After going 4-0 in the round robin, and defeating Israel in the semi-finals, they face Iroquois today for the gold medal.

Can Canada win this year’s tournament?

“You’ll have to tune in and see,” says Wade. “It’s the fastest game on two feet and anything can happen!”