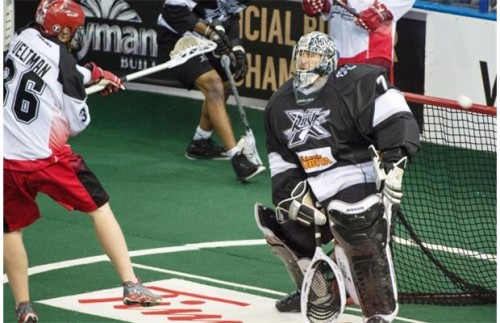 The Buffalo Bandits announced on August 10 that they have come to terms with unrestricted free agent forward Daryl Veltman. Veltman is a former first overall pick from the 2008 NLL Draft, where he was selected by the Boston Blazers. Veltman had the best time of his career there when he amassed 77 points (34 G, 43 A) in his rookie season, followed by a 65 point (23 G, 42 A) campaign in 2010. Since then, he has spent five seasons with the Roughnecks, where he is coming off a 2015 season where he scored 57 points (21 G, 36 A).
Personally I love this move. The Bandits add some much needed depth to the lefty forward position, a position in which I think they have lacked the considerable depth/support needed in order to become a successful team. Ryan Benesch needs another lefty out on the floor to open up the lanes, and be a good playmaker. With John Tavares possibly retiring in this offseason, Buffalo will lack the lefty supporting cast even more (Tavares did only suit up for 10 games in 2015), all clues point to Veltman as being a “replacement” (I say that loosely as no one can replace THE John Tavares) for the void left behind by a JT retirement.
Veltman has been a staple in the supporting cast of all-stars like Shawn Evans, Jeff Shattler, Curtis Dickson, and Jeff Shatler in Calgary, so he is no stranger to being a secondary offensive threat. I feel as though Jerome Thompson still needs time to transition into the NLL before he is seen as a viable secondary scorer. Then you have a lefty like Chad Culp who (while he brings an edge) is more of a “battle in the corners” and set picks type of player.
Overall this was a no brainer move for the Buffalo Bandits. They bring in Veltman as saftey net for the left side, and someone who will compliment the team’s leading scorer Ryan Benesch very well. GM Steve Dietrich commented that they wished they could have secured the rights to both Veltman and Pat Saunders. The later of which was during their attempt at extending an offer to the RFA Saunders from the New England Black Wolves—the offer however was matched by New England, meaning that the Black Wolves retain Saunders. I think this is just the begining of the Bandits trying to address the issues in their positional depths, and we should see more from them in free agency and at the draft in September.