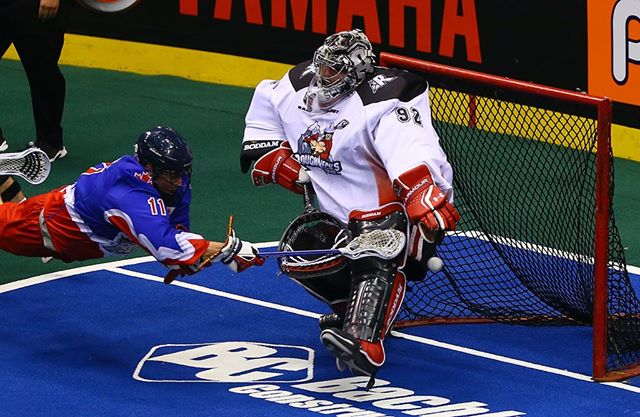 At 4-7 the Calgary Roughnecks are in last place in the NLL West Division and in danger of missing the playoffs for the first time since their inaugural season (2002). With just seven games left to play this year, Calgary probably needs to win at least four more games if they hope to get past the third-place Vancouver Stealth.

The Roughnecks currently have the fifth-most goals for (127), the fourth-best powerplay (55.57 percent success), the third-best penalty kill (52.73 percent), and they are solidly in the middle of the pack in several other statistical categories.

One problem jumps out, however: Starting goaltender Frankie Scigliano has the second-worst save percentage in the league among qualified players, at .751. Consequently, the Roughnecks have given up the most goals against, surrendering 138 so far.

Calgary has lost two one-goal games so far this year. A win in either of those games from just slightly better netminding would have them in a third-place tie with the Stealth. More than that, if the goaltending had kept a couple of the blow-outs closer, the offense might have been in a position to make a late-game run.

Realistically, Scigliano hasn’t played badly. In fact, just an extra save or two per game would probably be enough to give his team a shot at winning more games down the stretch. But he can’t afford any more off games, or even off periods—backup goalie Christian Del Bianco has shown this year that he is not ready to step in when needed (15.88 goals against and a .688 save percentage are poor by any standard).

If Scigliano can provide even average goaltending the rest of the way, Calgary should be in good shape to reach that final playoff spot. If he can’t, the Roughnecks will be packing up their lockers early this year.