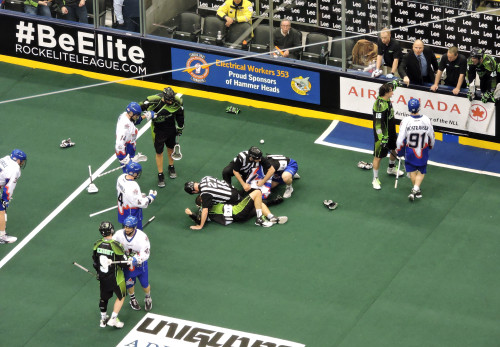 The Saskatchewan Rush have punched their ticket to the 2016 playoffs with a 13-8 win over the Toronto Rock Saturday night at the SaskTel Centre. 13,123 fans cheered on the Rush to an intense victory over the Rock, the team they beat 11-9 the night before. The Rush have secured a playoff spot and also kept pace with the Colorado Mammoth, also winners on Saturday, for first place in the Western Division.

The Rush/Rock rivalry reared its head just 16 seconds into the game with Billy Hostrawser and Nick Bilic squaring off at centre floor. Ten minor penalties plus the two fighting majors were called in the first quarter and the Rush took advantage, with Mark Matthews scoring shorthanded at 10:07 and Curtis Knight scoring on the power play at 13:06. The Rock managed two even strength goals in the quarter from Josh Sanderson and Turner Evans, his first in the NLL. Evans picked the corner over Aaron Bold’s left shoulder.

Jarrett Davis took two consecutive penalties for the Rush to start the second but Jeff Cornwall scored shorthanded to give the Rush a short-lived lead. Stefan Leblanc evened it up with his first of the game before Jeremy Thompson restored the Rush lead. Rob Hellyer tied it again at 9:09. It looked like the game would head to the break tied, but the Rock were able to call a timeout with eight seconds left to draw up a plan. When play resumed, Leblanc ran the floor in six seconds and elected to shoot, catching the Rush by surprise and giving his team a 5-4 lead at the half.

Evans extended the Rock lead to 6-4 2:02 into the third quarter, but the Rush then went on a six goal run to lead 10-6 after the third. Goals from Ryan Dilks and Matthews tied it up. Zack Greer and Dan Taylor each scored a pair to pump some energy back into the SaskTel Centre crowd.

The Rush started throwing the body late in the third which led to some undisciplined play by the Rock in the fourth, including a holding call on Sandy Chapman. Robert Church, who had five assists on Friday, potted a power play marker to make it 11-6. An untimely slashing penalty to Josh Sanderson came next, with Ben McIntosh promptly scoring on the power play to extend the lead by a touchdown.

Sanderson got one back on his next possession to cut the Rush lead to 12-7. Later, Toronto rookie Luc Magnan tried to go after Adrian Sorichetti, but the referees stepped in and only Magnan was handed a penalty. McIntosh picked up a second goal at 11:07. Hellyer scored his second 21 seconds later but the Rock’s six straight penalties in the fourth killed any chance of a momentum swing.

Bold made 31 saves while Brandon Miller made 38 in the Toronto net. The Rush were 2/10 on the power play and the Rock, missing a spark in the game, zero for seven. They received more bad news on the injury front as well, just a day after losing Scott Johnston for an indeterminate amount of time. Brett Hickey left the game early in the first to an undisclosed injury.

The Rock, who went 0-2 this weekend, have six games left and sit two and a half games back of the Rochester Knighthawks for the last playoff spot in the Eastern Division.