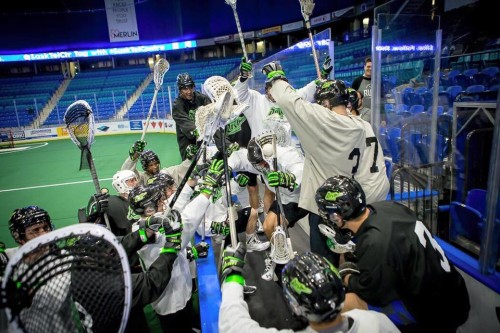 The Saskatchewan Rush did not disappoint the largest crowd in franchise history last night as they easily handled the Georgia Swarm 14-8 at Sasktel Centre. Over 13,700 loud and proud fans created a hostile environment for Georgia, as it was the Rush who did all the swarming and took the sting out of their opponents.

This game was not close at all as the Rush jumped to a 4-1 lead after the first quarter and then duplicated their effort in the second to come away with an 8-2 half-time lead.

Scoring for the Rush was Ben McIntosh with a pair including the opening score of the game. Mark Mathews with three and Greer, Cornwall, and Lafontine (shorthanded) all with singles. Randy Staats and Lyle Thompson replied for the Swarm.

The second half featured a better effort from the Swarm but it was not enough to pull them any closer to Saskatchewan as the teams kept trading goals with three a piece in both the third and fourth quarters.

The Rush defence was able to limit the leagues highest scoring offence in the Swarm to outside chances and when Georgia managed to penetrate and get in close, Aaron Bold managed to keep the ball out of the Rush net.

The Rush now move to 6-3 and keep within striking distance of the Colorado Mammoth while Georgia drops to 4-6 and into fourth place in the East Division putting their playoff hopes in jeopardy.

The Rush travel to Vancouver to play the Stealth on Saturday at the Langley Events Centre. Game time is 7pm PST.

Georgia returns home for a match against division rivals Rochester on Friday night at 7:30pm.