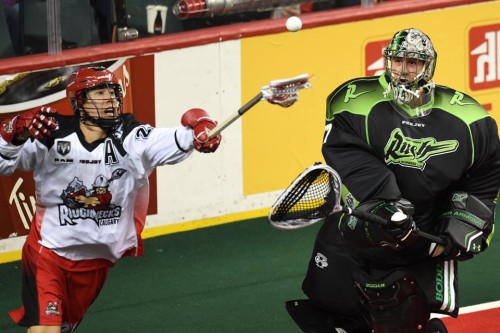 The Saskatchewan Rush completed a series sweep of the Calgary Roughnecks in the Western Division Finals last night by a score of 12-9. The victory gives the Rush the opportunity to defend for the Champions Cup against the Buffalo Bandits next weekend beginning in Buffalo and back to Saskatoon on June 4.

The 15,192 Saskatchewan fans in attendance were treated to a close hard fought game between two long time rivals that early on resembled more of a low scoring hockey game than lacrosse. Unlike the two previous finals meetings between these two clubs, the extra mini game was not needed as the Rush managed to break away from the Roughnecks with a four goal second quarter outbreak.

Zack Greer was the top goal scorer for the Rush with 4 goals and two helpers, while Tyler Digby replied with 4 of his own for the Roughnecks, two of them being with an extra attacker as head coach Curt Malawsky pulled goaltender Mike Poulin with a few minutes left in the game in a last ditch attempt to pull even with the Rush.

Saskatchewan goaltender Aaron Bold faced 48 shots making a total of 39 saves. He had a stellar game as he thwarted the Rougnecks offence over and over again.

The Rush now moves on to face the Buffalo Bandits for the Champions Cup. This matchup features the leagues top two regular season teams with identical 13-5 records. Buffalo won the only match between the two with a 19-18 thrilling overtime victory. The series is the best of three with the first game next Saturday in Buffalo.