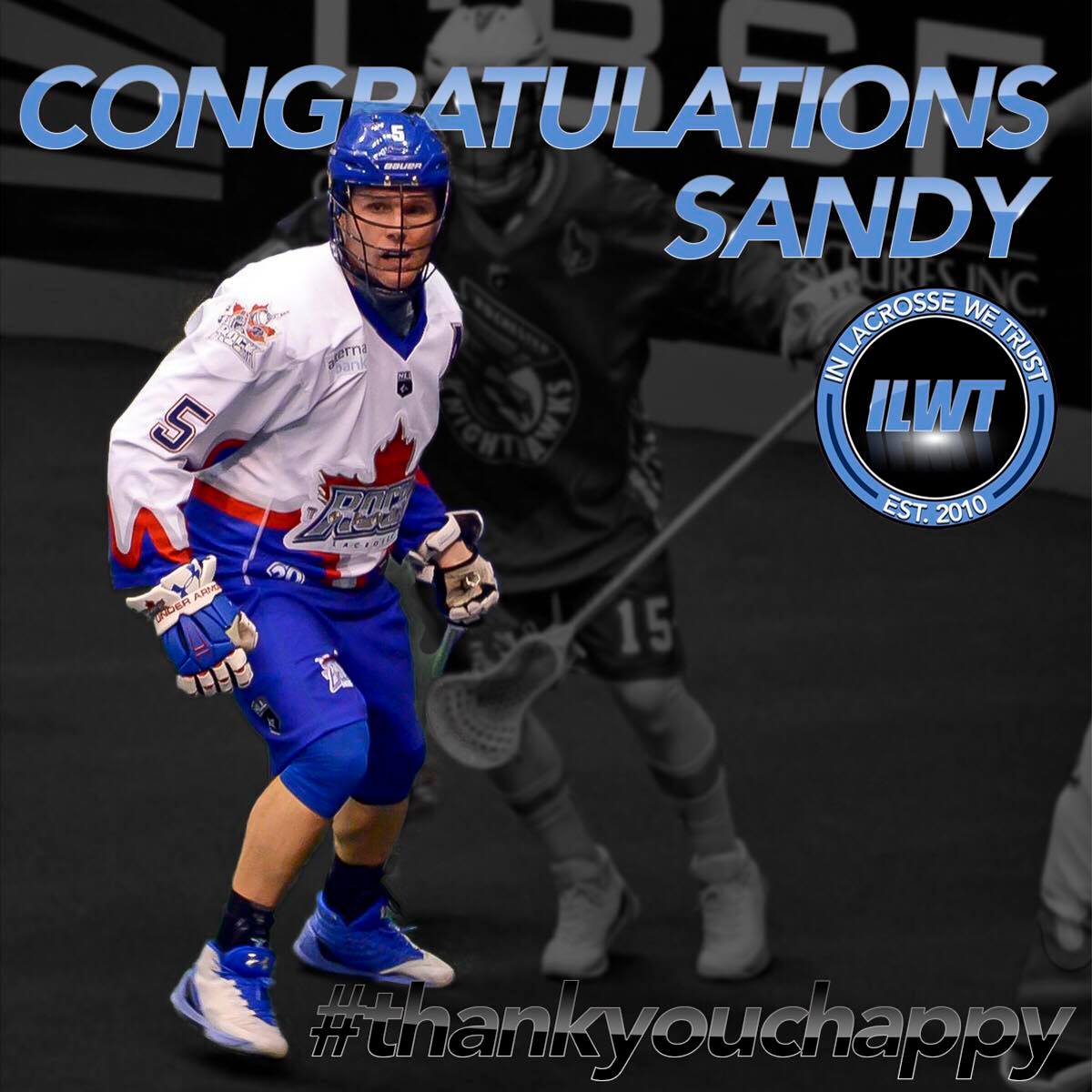 Oakville, ON – After 17 seasons in the National Lacrosse League, long-time Rock defender Sandy Chapman has announced his retirement from professional lacrosse.  Of those 17 seasons, the 37-year old Chapman played 13 of them in Toronto and won four of his five NLL championships as a member of the Rock.

Originally selected by the Rock in the first round, 12th overall in the 2001 NLL Draft, the Acton, ON native worked as hard as anyone from day one in the NLL.  It was his work ethic that always set him apart from other players and truly was his calling card throughout his NLL career.

Success came early and often in Chapman’s career, winning the NLL title with the Rock in three of his first four years in the league.

“Those first few seasons were quite a shock,” recalled Chapman.  “I didn’t have a deep understanding of the league and didn’t follow it very closely and suddenly I was playing in championship games and winning and it was an amazing experience.  I often look back and think that maybe I could have savored those moments a little more at the time, but it was a pretty impressive way to start off my career.”

After winning those early championships, he was claimed in the 2005 expansion draft by the Edmonton Rush and later flipped to Rochester where he would spend four seasons and capture his fourth NLL crown with the Knighthawks in 2007.  Following the 2009 season, the new regime was in place with the Rock and Terry Sanderson began to assemble “his guys” and Chapman was reacquired by the Rock.

“It was pretty special to see how that whole summer unfolded,” Chapman said of the 2009 off-season.  “Just how many guys came back to Toronto and were back in the mix.  It was always an honour to play for ‘T’ and try to meet his expectations, which were always so high.  Getting the chance to come back was a bit of a surprise but it was very special to have the chance to come back home.”

In 2010, the Rock returned to the NLL finals but came up short against the Washington Stealth.  Just one year later, Chapman and his teammates would get their revenge on the Stealth in front of friends and family, capturing the 2011 NLL Cup, the fifth championship of his career.

“Experiencing that last championship in 2011 with so many teammates I played with for a long time, through the summer and winter, and in front of family and friends, I don’t think I could have asked for anything more,” said Chapman.  “It was such a close game and factoring in losing the year before, it was just one of the most enjoyable games and nights I ever got to experience.”

In 252 regular season games, Chapman scored 34 goals, 117 assists for a total of 151 points and scooped up 1027 loose balls. Upon his return to Toronto in 2010, his individual work on the floor was recognized and Chapman was named the NLL’s Defensive player of the year.

As his career progressed, Chapman definitely evolved into a leader.  His play on the floor always reflected that of a lead-by-example type of player, but he also had some great influences that helped him learn how to lead off the floor.

“I played with a lot of great leaders like Jim Veltman and Colin Doyle,” said Chapman.  “However, one guy I loved playing with was Rodd Squire.  He had unbelievable skill but really fit into a role within the team.  I really tried to learn a lot from him and even though I only played with him for one year, he had quite an impact on me.  Eddie Comeau was also a huge influence on my lacrosse career and getting me into the league.  I played for him in Junior and then for several years in the NLL.  I owe so much to him.  Apart from being an excellent coach and teaching me many of the intricacies of the game, he always had confidence in me.  More than I probably ever had in myself.

“Throughout your career you get put in different situations.  Your leadership role grows within a team.  One of the great things in the early years was that you could always talk to the leaders on the team, even if you were a first or second year guy, you always felt included.  I always tried to make sure everyone felt included and part of the team culture and encouraged them to bring up their ideas.  I always believed that everyone has been in different situations and can bring something that can improve the team.”

Deciding to walk away from the game is always a tough decision.  Several players that Chapman won championships with have decided to step away in recent years and he admits to calling on them for some advice as he began to think maybe this was his time to retire.

“I had conversations with guys over the past three or four years and asked them what the signs were for them,” explained Chapman.  “I think everyone is kind of in the same boat at some point.  Family and time commitments and how much time it takes to get your body prepared and just feeling like the body just isn’t quite the same as it used to be.  I could still do a lot of the things I needed to do on the floor, but then you see certain things leaving your game and the seeds of doubt start to creep in.  I knew the time was right to move on.”

Like any pro athlete, there are a lot of people behind the scenes that give that player the opportunity to be successful and have significant influence on their career.

“I want to thank my wife Sarah for all her support, and my children Emilynn, Grayson and Cohen for being my biggest fans.  My family and friends have also been a tremendous source of support for so many years.  I’d like to thank all my teammates, coaches and management that I played with and played for.  In particular, I’d like to thank Jamie Dawick for creating a welcoming culture in Toronto and embracing not only me, but also my family.  He has always taken good care of his players and for that I am so grateful.  I would also like to thank the fans, it’s truly been an honour to play in front of you for the Toronto Rock.”