Just six months ago, the Calgary Roughnecks stood atop of the NLL mountain after a thrilling overtime victory in the NLL Championship Game. With a season-ending seven-game winning streak and a league title, there wasn’t much for head coach Curt Malawsky to address. Calgary will look to climb that mountain again with virtually the same group of guys that got them to the top last year. Let’s take a look at how the Roughnecks off-season shaped up.

The loss of Dan MacRae was the biggest blow dealt to the Roughnecks. The nine-year veteran and team captain was plucked by the New York Riptide in the fourth round. Despite being left unprotected, MacRae’s departure was still surprising. 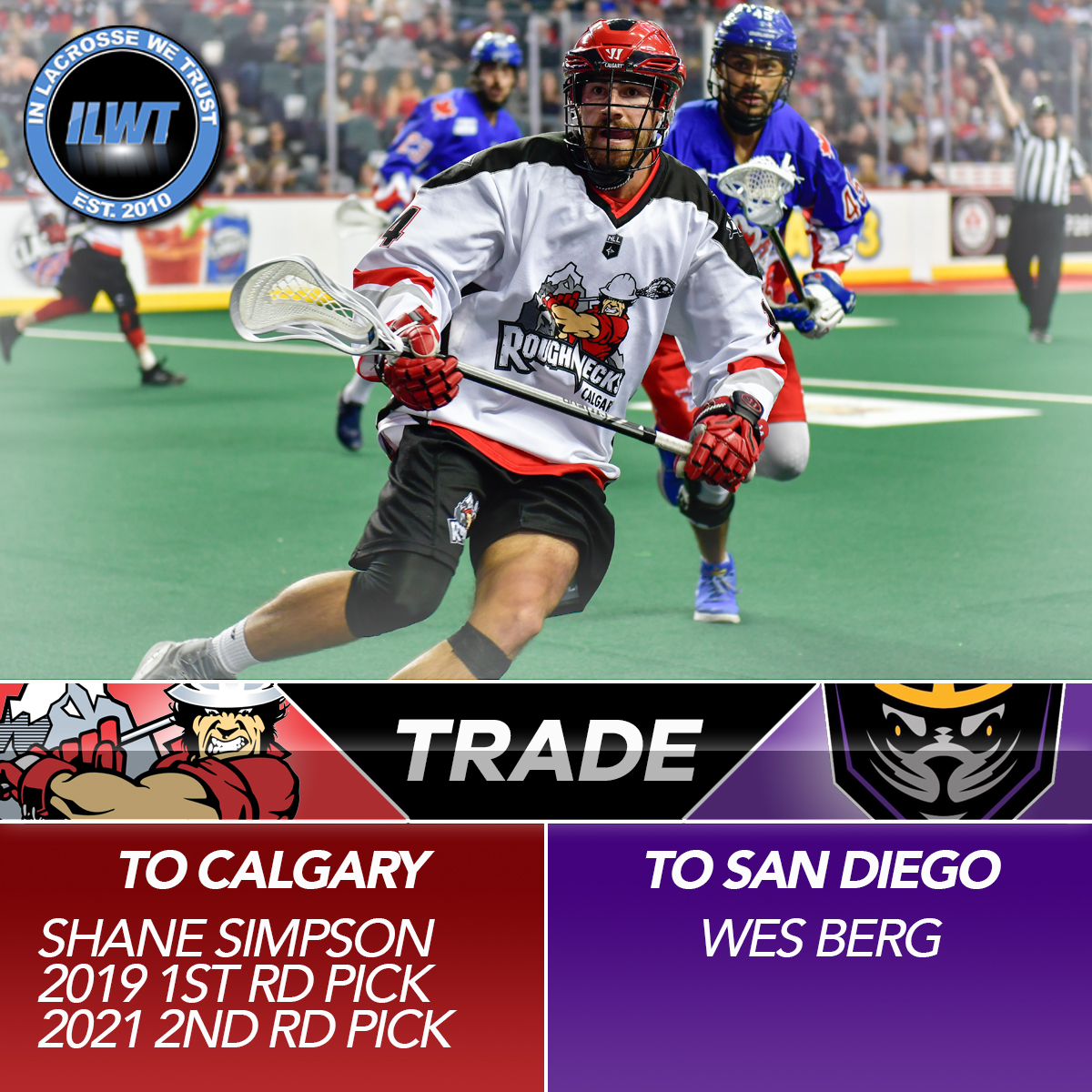 “I don’t think we thought he would go because he was an unrestricted free agent, but we knew that risk was there,” said general manager Mike Board. “A bit of an unexpected loss then they (New York) franchise tagged him so we couldn’t talk to him about coming back as a UFA.”

The fan favourite and heart and soul of the Calgary defense leaves the team after playing 145 games and accumulating 100 points and 697 loose balls.

The other player taken was speedy defender Shane Simpson. The Knighthawks snapped Simpson up in the fourth round, however his departure ended up being a solution to a nagging problem. On July 12th, Calgary along with Rochester and San Diego negotiated a three-way deal that saw Simpson dealt to the Seals in return for Turner Evans. San Diego then packaged Simpson along with a first and second round pick to Calgary in exchange for Wes Berg. Berg had sat out the entire 2018/2019 season in a contract dispute with the club.

Calgary selected twice in the first round and with the seventh overall pick chose 6’4” defender Liam LeClair from the Six Nation Arrows. LeClair adds another big athletic body to an already talented group of defenders and with the loss of Dan MacRae should get a chance to contribute right away.

“We watched him very closely over the summer. He was junior defensive player of the year in Ontario and moved up and played with Six Nations towards the end of the season and into the playoffs. (LeClair) was playing against men and certainly didn’t look out of place,” commented Board.

With the very next pick, the Roughnecks selected righty forward Haiden Dickson from the Coquitlam Adanacs. Dickson had gained the attention of other clubs which pushed the Riggers to select him in the eighth overall spot. The young forward still has two years of junior left and with a stacked right side, Calgary will have the luxury of developing Dickson at a measured pace.

“A young kid who’s got great stick skills, he’s got great athleticism, and good size,” said Board. “We were quite impressed with his game. He’s got a fearless game – he goes to the net. It’s kind of fun to have those young guys around.”

With few exceptions, Calgary’s lineup looks very familiar for the upcoming season. Led by reigning league MVP and newest Roughnecks Captain, Dane Dobbie has been entrusted to lead the team back to finals. Joining him on the left side is the talented Jesse King as well as the big body of Dan Taylor. The departure of Riley Loewen opens the door for Ryan Martel to earn a spot as an everyday NLL’er. Headlining the righties and entering his 10th season is Curtis “Superman” Dickson. The lethal Dickson has accumulated 395 regular season goals and is one of the game’s most exciting players. Third year forward Tyler Pace can expect to see increased minutes as veteran Rhys Duch will likely miss the first month of the season rehabbing from off-season leg surgery. Roughnecks’ hopefuls Sean Tyrrell, Haiden Dickson, Marshal King and Cordell Hastings will battle it out at training camp for that last spot.

While offense tends to get all the attention, the Roughnecks’ defense is arguably one of the most dynamic units in the NLL. Veterans Curtis Manning, Greg Harnett and Tyler Burton are joined by Chad Cummings, Anthony Kalinich, Shane Simpson, Eli Salama and Reece Callies. Add Zach Currier, Tyson Bell and Mitch Wilde to the mix and you get one of the most explosive defenses in the league.

The spark that sets the whole thing off is goaltender Christian Del Bianco. The young goalie seemed to play virtually every minute last year and was a rock throughout the playoffs. Just like the defenders in front of him, Del Bianco is fast and athletic and loves to attack when he gets the chance. Defensive coordinator Rob Williams has this group trending in the right direction. Over the last three years the Roughnecks have seen their goals against drop from 220 to 201 – the equivalent of a goal a game.

If Calgary can stay healthy, they have a terrific chance of making another run at the championship. Curt Malawsky has instilled a terrific culture in the dressing room and that will only continue to strengthen. Consistency will be key for this group as they look to improve on a 10-8 record and prove that last year was no fluke. As the Roughnecks know, if you want to have fun, you’ve got to win.