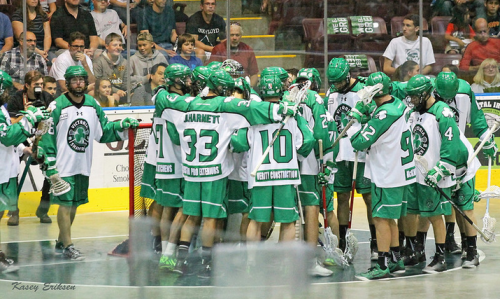 Ten years later and the Victoria Shamrocks are back on top of the lacrosse world.

The WLA champion Shamrocks are now Mann Cup champions after defeating the Peterborough Lakers in six games to win the 2015 title. After losing the cup to the Six Nations Chiefs in 2013 and 2014, it was extra sweet for the Shamrocks to beat the Lakers, the team they defeated in 2005, the last time a WLA team won the cup. That series also ended in six games.

This years’ versions of the Shamrocks and Lakers were so closely matched and it showed in the final scores. Each team had one blowout but three of the games were two goal games. In the deciding game, the Lakers ran out of gas in the third period while the Shamrocks, bolstered by their game five win, battened down the hatches on defense and peppered Matt Vinc with shot after shot. The final game was close before the Shamrocks nailed the Lakers coffin shut with a six goal third period to win 12-6. In both of the past two years, the Shamrocks had taken a 2-1 lead in the series only to end up losing 4-2.

After game five, Corey Small said the team wasn’t thinking of past losses.

The last time Darryl Veltman played against the Lakers was in the 2007 Mann Cup as a member of the Coquitlam Adanacs. The Lakers won that series in six games. For Veltman, those memories are harsh, so revenge for that series, as well as for his Shamrocks teammates who lost to the Lakers the last time they played each other in 2006, was a great feeling.

“It was funny,” he said. “We were holding our breath there for awhile wondering whether it was going to be Six Nations or Peterborough and as soon we found out it was Peterborough, my brother back east texted me right away and said it’s redemption time and we took that to heart. It took me 10 years but I finally got redemption and it feels awesome.”

Head coach Bob Heyes was overjoyed at his team’s effort in the series.

“I won two Mann Cups as a player and to be honest this means more,” he said. “When you get to lead a great group of guys it’s great, my coaching staff probably made me look good. They’re the ones that do all the hard work, they’re the ones that put everything together, I just kind of guide them, and if I make mistakes they tell me I screwed up. I’m happy for the organization. We pride ourselves on being a first class organization and we deserve this. Plain and simple, we deserve this.”

Most of the Shamrocks were speechless after the final buzzer went, although elation beyond compare was the primary emotion. Most were unable to form words for awhile, as they just enjoyed the moment.

“We’ve been dreaming about this day for a long time and the last two years being here and not coming out with it, is indescribable,” Small said. “It’s such an incredible high. So happy for all the guys that have been for for the last five or six years with me. We put out quite an effort to get back here and it’s unbelievable.”

After losing the last two Mann Cups, the Shamrocks were looking for the third time to be the charm, and to put into practice everything they learned from the Chiefs the past two years.

“I’m ecstatic,” Veltman said. “We set out with one goal in mind this season, and being here was number one, but winning it was number two and we did that tonight.”

Many happy moments were shared on the floor after the game as the Shamrocks accepted gold medals for their win as well as the cherished trophy. New fathers Dan Dawson and Rhys Duch held their new babies in the traditional team photo. Duch’s son Finnley was born after game two, and Dawson’s son Theo is four months old.

The win was special for the fans and the city of Victoria. After suffering through the past two Mann Cup losses, their patience was rewarded in 2015.

“They’ve been waiting since 2005 I believe, you can see how loyal our fans still are,” Small said. “Throughout the regular season we still pretty much sell out or close to it every game. They’re starving for it, we were starving for it, to bring [the Mann Cup] back into a place like Victoria where the history of lacrosse is so rich and so many great players have done this before us, it feels special to be part of this legacy.”