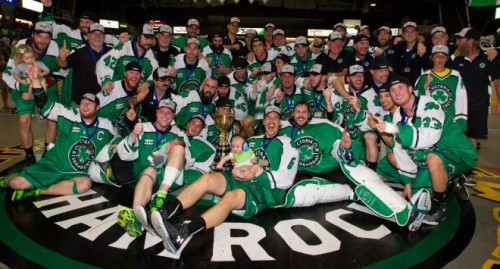 Green lids littered the floor of The Q Centre Friday night, indicative of the party to come as the Victoria Shamrocks won their first Mann Cup in a decade. The ‘Rocks beat the Peterborough Lakers 12-6 to close out the best-of-seven series in six games, the culmination of a dominant season for Victoria.

Throughout the season Victoria left little doubt about who was the team to beat; not only in the WLA, but in the country. Say what you will about the impact of buying of players in the summer circuit, but the moves Victoria made made a huge impact on this series.

Aaron Bold was excellent besides a rough game two outing, while Dan Dawson got better as the series wore on. Dawson’s impact was two-fold, as Peterborough had to account for him on the floor while opening it up for guys like Corey Small, Daryl Veltman and Jesse King on the left side. Rhys Duch and Scott Ranger were amongst those who also took advantage of the space opened by Dangerous Dan. Dawson had a ridiculous eight assists in the series-clinching win, perhaps proving his worth to the Shamrocks in a matter of the final 60 minutes.

The Lakers were a formidable foe, having scraped by the Six Nations Chiefs in a seven-game war before coming out west. At times Peterborough looked tired—as a result, their transition game wasn’t able to dictate the flow of the game like they were able to against Six Nations. After playing so many high stakes games in such a short amount of time, it wasn’t a surprise to see Peterborough not having much left in the tank when Friday night rolled around.

Missing Adam Jones for the Monday-Tuesday-Wednesday games was also a huge momentum changer, especially as Jones was arguably the best player on the floor in game two. Holden Cattoni played well in relief, and the other lefties were able to chip in during different points of the series, but it was clear the Lakers missed Jones’ presence on that left side.

The West is used to seeing offences wilt against the pressure packages of eastern defences, but the tables turned in this series. Curtis Dickson and Shawn Evans had just three goals in the final two games, while Mark Steenhuis wasn’t the impact player we saw in Peterborough’s game seven MSL Finals win. Cory Vitarelli never seemed to get on track, although he was still a force off the ball.

Victoria wasn’t the juggernaut people come to expect of Mann Cup champions, but they played a modern brand of lacrosse, using athleticism to push the ball up and down the floor, a free-flowing offence and a tough defensive unit. With Bold playing his best lacrosse of his career, the Shamrocks were going to be a tough out for either Peterborough or Six Nations. Victoria was fully deserving, and proved that by jumping out to a huge 5-0 lead in the Mann Cup-clinching win.

Once this series got away from the extra-curricular activities and the politics coming from both sides, fans were exposed to excellent lacrosse from both sides and that’s really what matters. It will be interesting to watch how teams react to Victoria’s win in the offseason—you could begin to see teams like New Westminster spend more to compete with the Shamrocks. Out East, teams like Oakville, Brampton and Brooklin should look to Peterborough’s rebuild and capture that essence within their own organizations.

The Lakers have a lot of youth on their team, some excellent players likely to come up from their Junior A program and a dedicated executive that’s been able to deliver against the perennially high expectations of Laker fans. They will be a force to be reckoned with next year.

It was a relief to see an Island staple commodity—Lucky Lager—finally flowing from the Mann Cup once again. For the Shamrock faithful, this could be the start of another special run of Canadian supremacy.