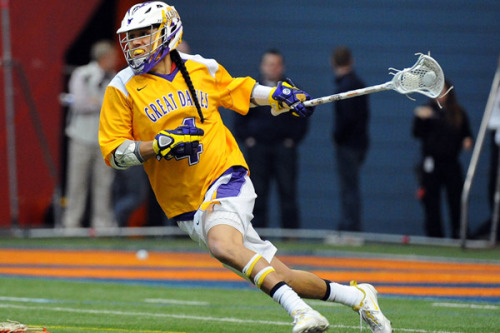 Lyle Thompson took home the 2016 Tewaaraton Trophy for the second year in a row. Only one other player, Mikey Powell of Syracuse, has won the trophy twice. Lyle has had an amazing career at Albany. Lyle compiled 175 goals, 225 assists, and 300 points. His 2014 and 2015 seasons rank first and second respectively in most points in a season in NCAA history, and his 77 assists in 2014 ranks tied for first.

Ultimately Lyle Thompson may go down as the greatest lacrosse player of all time. Certainly he is one of the most influential players the history of lacrosse, fitting in with the Powells and the Gaits. It will probably be some time until we have another game changer at the college level but hopefully we don’t have to wait another ten years.

Just for fun, I put together a list of my favorites for the 2016 Tewaaraton Finalist list: Myles Jones, Matt Kavanagh, Matt Rambo, Dylan Molloy, and Ryan Brown. If I had to pick now, I think Myles Jones will probably walk away with the award.

In terms of next year, the one team that really stands out is Notre Dame. The Fighting Irish have another stacked team returning. Sergio Perkovic comes back to lead the midfield. In the semifinal game versus Denver, Perkovic had five fourth quarter goals to get his team back into the game and cause an overtime period. At attack, Matt Kavanagh will be return as the top attackman. Kavanagh is a beast at the wing and is one of the front runners to be a Tewaaraton Trophy Finalist again next year. Mikey Wynne and his 33 goals in 2015 will join Kavanagh at the attack position. Defensively Notre Dame will return Matt Landis, Garrett Epple, and Edwin Glazener. Landis is one of the best close defenders in division I and is a third team All-American while Epple is an honorable mention All-American. More good news for the Irish is that goalie Shane Doss will also return.

I believe that the smart money is on Notre Dame to take the ACC crown and once again compete for the National Championship. I would rank the ACC for 2016 as such: 1. Notre Dame, 2. Duke, 3. Syracuse, 4. Virginia, and 5. North Carolina. I have a strong suspicion that this could be the first time since the ACC expansion that an ACC team does not make the NCAA Tournament. The issue for Carolina is that it will lose all three starting attackmen. The Heels also lose midfielder Chad Tutton, LSM Ryan Kilpatrick, and defenseman Jake Bailey. That means the Heels graduate two second team and two honorable mention All-Americans this year.

As for the other power conference, the Big Ten, I believe that it will be a two team race again. Hopkins and Maryland will dominate the league with Ohio State again in the third position. Take a look at the Jays, this team will return Ryan Brown, Shack Stanwick, Joel Tinney, and Holden Cattoni. I think JHU could be a big time threat next year and could very well disrupt the college landscape.