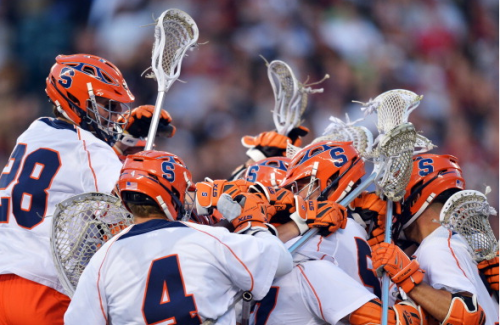 Well the final four is set. We have Notre Dame vs. Denver and Johns Hopkins vs. Maryland. I have to say, I am very surprised that Maryland won, but I’m more surprised at how it won. I did not expect that the Carolina offense would struggle so badly; it was never really close at all. I expected the UNC attack to run all over Maryland and outscore the Terps significantly, but Jimmy Bitter and Luke Goldstock were held to just one goal. I was even more surprised the Kieran Burke had just one save and made none in the first half. It was simply all Maryland, all day.

In the other contest on Sunday, the Orange fell to the Blue Jays 16-15. This was maybe the worst officiated game I have ever watched. The biggest blunder came on a late hit to the head of Nicky Galasso after he missed catching a pass. Hopkins defender John Kelly slammed Galasso and no flag was thrown. This is exactly the type of hit that the NCAA is trying to get out of lacrosse, and it was bad enough that it could have warranted an ejection. Desko actually yelled at the official that Kelly should be out of the game and the referee replied that he didn’t see the hit. It was a blatant hit to the head as Kelly targeted the helmet, and it happened in the middle of the field. Inexcusable for any referee never mind three of them. Seconds later on a loose ball the officials awared a time out to Hopkins when the Jays clearly didn’t have the ball. Then of course there was the Wells Stanwick goal at the end of the third period when he may have landed in the crease on a dive and the officials called it a good goal. Not only that but there was still time left on the clock yet no faceoff occurred. At the end of the day, however, it was the Syracuse defense that blew the game. A lack of effective slides and poor communication on the defensive end sealed the fate for the Orange.

I’ve been seeing the usual “fire Desko” comments on the message boards, and I continue to believe that anyone who actually thinks this is a good idea doesn’t have their head on straight or simply doesn’t know the game that well. The guy has five National Championships in sixteen years, and is one of the most winningest coaches in the game. If you fire Desko you risk dropping the program into a whirlwind of uncertainty. The only name that could possibly replace him is the Syracuse women’s coach, Gary Gait. Nevertheless, Desko has earned his spot.

I was covering this team in 2010, 2014 and 2015, and I can shed some insight on some of those years. Back in 2010 before the start of the Tourney, I said that this team would lose to Army. The Orange had already played the Black Knights in the regular season and I thought that the Army game plan against SU in the regular season was spot on: possess the ball and work the clock. This was a Syracuse team that had slow starts and relied on second half spurts to win games.

In 2013, it was the faceoff game that doomed Syracuse, but lets not overlook the fact that SU lost in the National Championship game. In 2014, the Orange ran up against a very good Bryant team and one of the best coaches in the game, Mike Pressler. Syracuse had multiple areas of concern last year: turnovers, failed clears, and poor faceoff play. 2014 was not a National Championship caliber team, it was a team that received maybe the worst loss in program history at the hands of Duke earlier in the season. I’ve said it before, and I’ll say it again, I thought that Desko had his best coaching performance in 2014, turning that season around.

This year the expectations were high, especially with newfound faceoff specialist Ben Williams in the mix. The expectations, though, were arguably artificially inflated due to Williams’ play masking the ineptitude at defense. The defensive issues began to surface towards the end of the season, and really erupted in the ACC Tournament.

This is a proud program. A program that is rich in history, tradition, and family. That last word may be the most important: family. Roy Simmons Jr. used to tell his freshman that he didn’t ask for much but he did ask them for their first born sons. The familial aspect of the program is something that most of college athletics lack, yet it has been a mainstay on the Syracuse University lacrosse team for decades. Firing Desko could risk a change in the program’s DNA, a change that could turn boosters, supporters, fans, and alumni off of Syracuse lacrosse.

I know that fans want to win, and I know this fan base in particular is used to winning, but firing Desko is not the way to do it. The game has grown and the talent level has risen. It is not a lack of coaching ability, but a growing talent pool that can’t all be sucked up by Syracuse.