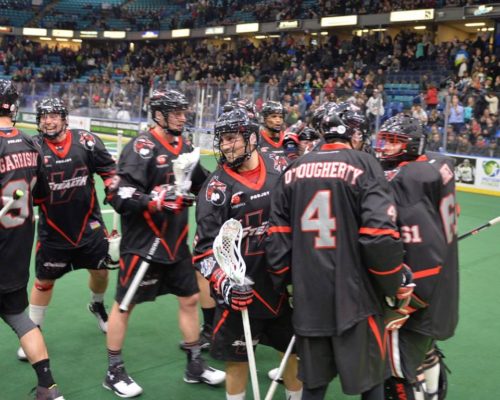 Confidence. That’s what the Colorado Mammoth are feeling after going to the defending Eastern Division Champions home and dominating them from start to finish. Buffalo started out flat against a much improved defense in Colorado. Goalie Dillon Ward provided a jump right from the start of game one. The defense sparked the offense from the back end and provided more offensive opportunities with its high pressure play. The defense finished 2nd in the league last year in goals against, so they were bound to be improved with the majority of the unit returning for the 2017 campaign.

The offense got the job done with consistent play and sharing of the ball. 19 assists on 12 goals has to make Coach Gill and Stroup happy to see unselfish play. The excitement of getting a huge win on the road is over and now the focus is to the Vancouver Stealth Saturday night. The Mammoth are even tougher at home. Sporting an 8-1 record last season, they look to keep that consistency going when the Stealth come to town. The fans will be rocking the Loud House and that will add some extra spark during those first few shifts on both sides of the ball.

So lets get to it.

The Stealth were inactive on the opening weekend of the 2017 NLL season. They knocked off Calgary 12-11 in exciting fashion last night. Not an easy task to be given two road games back to back at two of the toughest teams in the West. The Stealth will hope to stay healthy as they travel to Colorado early Saturday morning and prepare for a game shortly after arrival.

The Stealth are coming into the season with some uncertainty. They finished with one of the best power play units in the league but couldn’t make the playoffs. The injury bug has also hit them in the pre season. Veterans Jarrett Toll, Garrett Billings, and Cory Conway are on Injured Reserve. Rookie James Rahe who was expected to make offensive contributions right away joins them. That and Tyler Hass a productive transition player is on the hold out list. Here’s the good news: Rhys Dutch, Logan Schuss and Cory Small return to the offense. The trio put up 111, 86 and 84 points last season respectively. Not an easy task for the Mammoth to contain. Look for second year man Jordan Durston to make an impact. He played for the Six Nations Chiefs this year and was named Major Series Lacrosse Outstanding rookie this summer.

Defensively, the Stealth return Goalie Tyler Richards who came out of retirement last year to help the ailing Stealth in hoping to make a run for the playoffs. He posted a .760 save percentage last year. In front of him, Curtis Hodgson returns to lead the defense in his 12th year in the NLL and Matt Beers returning for his 6th season will help bolster the back end. Rookie Brendan Fowler who will take face-offs for the squad will be one to watch as he was dominant in the college game with Duke University. He should be able to give the Stealth additional opportunities on the offensive front.

The Mammoth open their home stand against the Stealth Saturday night and are healthy going into the contest. Expect emotions to be high for both squads as there is no love loss between these division rivals. The squads split last seasons meetings 2-2, both teams suffering big losses; Colorado going to Vancouver and winning by 9, Vancouver returning the favor by beating the Mammoth by 8; and the last two meetings between them ending in one goal contests. No surprise with two teams with a long history going back to the San Jose Stealth days.
Prediction:

Colorado will look to continue to gel on the offensive end. If they continue to share the ball they can put up big numbers and get everyone involved. This will cause a problem for the Stealth who will come into the game fatigued. Grant will get his points and Greer will add depth to the left side. Crawford will gain energy from the crowd for his creative goal scoring and home- town man Jeremy Noble will bury his chances. The defense will look to push the tempo early to give its offense plenty of chances to get to Richards. Both teams are looking to be 2-0 at this end of the weekend, so it has a lot of meaning at this point.