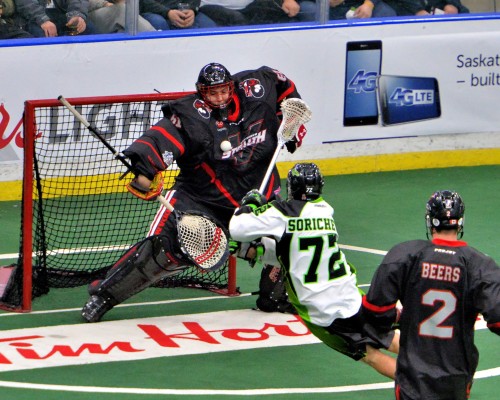 There was plenty of pre-game hype surrounding the Saskatchewan Rush and their home opener tonight, but the Rush failed to live up to their expectations. Right from the opening faceoff the Rush played an uncharacteristic style of play that showed some first-time jitters that you would expect from a team playing in front of its Saskatoon home crowd for the very first time in franchise history.

This was not the way coach Derek Keenan and his staff envisioned this night would unfold. After all, the Rush are the defending NLL Champions and they were playing the lowly Stealth, who they beat all three meetings last season.

The Stealth scored the first three goals of the game on two power-play goals from Logan Schuss and Rhys Duch and an unassisted marker from Jordan Durston.

Curtis Knight, after missing all of last season due to injury, scored the first Rush goal of the evening to put Saskatchewan on the board. Robert Church scored 39 seconds later from Riley Loewen and Jeff Cornwall to bring the Rush within one.

Then it turned into the Corey Small show as Small scored his first of six goals on the evening. The former Rush Alumni had an outstanding game as he did his part to spoil his former team’s big night.

The home crowd got a taste of the passion in lacrosse when Nic Bilic and Cliff Smith got into a spirited fight late in the opening quarter that saw both players connect with many solid punches. The fight seemed to energize both the crowd and the Rush as the Rush had a strong second quarter, scoring seven times to take a 9-7 lead into the half.

The second half started with both teams trading a couple goals in the third quarter and the Rush holding on to a two-goal cushion. The Stealth took over the game in the fourth, much like they did in the first, scoring all four goals, one into an empty net, to cruise to a 13-11 victory.

With the win the Stealth are now 1-7 all-time against the Rush franchise and are 1-1 on the season. The Stealth next play against the Colorado Mammoth next weekend at home at the Langley Events Centre.

The Rush now drop to 1-1 and will get another bye week to re-group before they try their luck with the Mammoth at Sasktel Centre on Friday January 29.

The Rush had their Championship Banner raising ceremony before the game got underway. Interesting that the banner referred to the Champions as simply the Rush affiliated to neither their former city of Edmonton nor their current of Saskatoon.