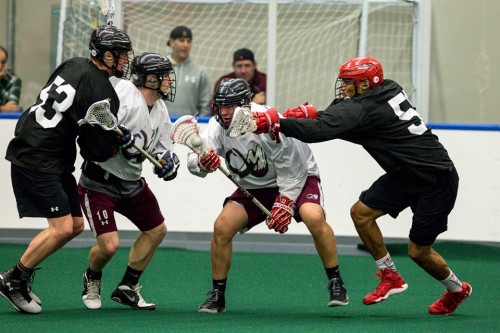 In a showdown of the lone undefeated teams in the National Lacrosse League it was the Colorado Mammoth (3-0) who ended up keeping their streak intact against the Buffalo Bandits (1-1) when Mike Burke ripped a blast from the point in overtime to secure the 15-14 overtime victory Saturday night at the Pepsi Center.

The loss against the Mammoth not only gives the Bandits the first loss of the regular season, but also leaves the team still looking to make even more adjustments to their defensive schemes before their next game at home against the Toronto Rock on Saturday.

For the Bandits on Saturday they were led by their usual offensive trinity of Dhane Smith with eight points on three goals and five assists, Ryan Benesch with six points on two goals and four assists and Mark Steenhuis with five points coming from four goals and one assist. Besides the trinity, the Bandits on this night also received a more balanced offensive effort with both the offense and defense recording some tallies and newcomers like second round draft pick Anthony Malcolm recording his first goal in the NLL and Jerome Thompson coming up big in recording four assists for the evening.

Bandits starting goaltender Anthony Cosmo did all he could against an incredibly potent Mammoth offense (averaging almost 16 goals per game) as he recorded 40 saves in 55 shots in the loss.

Leading the way for the Colorado Mammoth this evening was Canisius alum Adam Jones with eight points coming from a six goal sock-trick and two assists. Forward Callum Crawford also had a huge night on the score sheet with nine points coming from nine assists and John Grant Jr. recording six points from three goals and three assists. Mammoth goaltenders Dillon Ward and Alex Buque both saw action tonight against the Bandits with Ward recording the win on 41 saves in 54 shots and Buque allowing one goal on one shot in 19 seconds of playing time.

Bandits head coach Troy Cordingley was not pleased with his team’s performance against the Mammoth on Saturday.

“Unfortunately our A-game was left at home,” Cordingley said. “This league is so tight and it’s the little things, loose balls, getting back on defense, they all add up. Tonight we were outworked and Colorado was better than us tonight.”

For two high scoring offenses it took almost four minutes for either team to get on the board first. With the Mammoth’s Bryce Sweeting in the box for an illegal cross-check, it was the Bandits Dhane Smith and their rejuvenated power-play that got them their first goal of the evening.

Less than a minute into the second quarter it was the Bandits striking first and fast with their forward Malcolm recording his first career goal in the NLL.

The next six minutes of the second saw the first of many momentum swings during the game with the Mammoth receiving theirs from a three goal run with a pair from Jones and the first goal of the evening for Grant Jr.

With the Mammoth down two men with Joey Cupido serving two for hooking and Sweeting serving two on an illegal substitution call it was Dhane Smith and the Bandits power play coming up big again with a goal that broke the Mammoth three goal run and kept the Bandits within one midway through the second quarter.

Jones would record his fifth goal of the first half with a shorthanded marker to help keep the Mammoth two goal lead in hand with less than four minutes left in the half.

Not wanting the Mammoth to let the game get too out of hand before the half, the Bandits responded back with a two goal run of their own coming from the defensive side of the ball with Nick Weiss and Steve Priolo coming up with two huge individual efforts past Ward to tie the game at 7-7 at the half.

For the entire third quarter, the fans in the stands and the audience at home witnessed a real tug of war with each team receiving big goal runs with neither team relenting to the other.

The Mammoth received the first big momentum swing in the opening three minutes of the third quarter with a big two goal run by Wardle and their big up and coming forward in Eli McLaughlin. The next eight minutes would see a huge momentum boost swing back into the Bandits favor with a three goal run of their own coming from forwards Steenhuis, Benesch and Chad Culp to give the lead back to the Bandits at 10-9 with less than four minutes remaining in the third quarter.

Mammoth forward Grant Jr. put his team on his back for the remainder of the third by recording his last two goals of the game and giving the Mammoth back the lead at 11-10 heading into the final quarter.

The opening of the fourth quarter saw the Bandits coming out with guns blazing. Benesch, Smith and Steenhuis each picked up a goal over the opening two minutes and helped the Bandits come out to a commanding 13-11 lead early in the fourth.

After Sweeting and Bandits forward Mitch Jones scored a goal for each for their respective teams to make it 14-12 Bandits, the Mammoth’s special teams play came up huge for the team when it was needed most.

Jones would record his sixth goal and final goal of the evening for his sock-trick and Mammoth captain Cupido would get a shorthanded goal for his team and tie the game at 14-14 with five minutes remaining in the game.

Each team showed a flair for the dramatic in the final minute of regulation as Benesch for the Bandits and Jones for the Mammoth each had a chance for the game winning goal but unfortunately each of their respective shots hit the crossbar and the game was headed into overtime.

During an overtime that saw both teams each have multiple chances to end the game it was the Mammoth’s goal from Mike Burke at 3:25 that sealed the deal for the Mammoth and help keep their undefeated streak alive at three games.

Buffalo’s next game will be home at the First Niagara Center Saturday night for a January 23 showdown against the winless Toronto Rock.