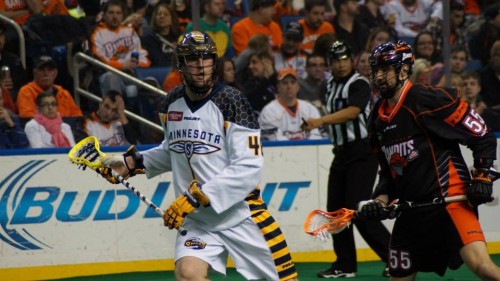 Timing in the NLL seems to not matter to anyone, with the Division Finals this weekend and the Championship round coming up fast the Edmonton Rush claimed earlier this week that they may not return to the city of Edmonton and then last evening the Minnesota Swarm announced their intentions to move the franchise to an undisclosed market. This comes after the Swarm fired their coaching staff following the end of their season in early May and weeks of rumors swirling that they would either move or fold.

Team owner John Arlotta said that “Our lease at Xcel Energy Center ended this year and it became obvious that the economics would not lend themselves to a sustainable BUSINESS model for an independently owned NLL franchise.

He would go on to thank the corporate sponsors and the staff for their time in Minnesota, along with the dedicated fans.

The Swarm will be joining the elite group of professional sports teams to leave the Minnesota market, this group includes the North Stars (Norm Green still is one of the most hated figures in the state) and the Lakers. Now Arlotta is not going to be in the held in the same realm as Green is but for those dedicated fans the loss of the only professional lacrosse team in the history of the state is going to sting for a long time.

The ownership has stated a number of times over the last few years that they have a money issue and that they would not have enough money to continue the team. These money issues have been claimed, by the organization, to be because of the lack of season ticket sales. Unfortunately this is a roundabout way of blaming fans in an area that doesn’t have a ton of expendable cash. Even though the Swarm was struggling to sell season tickets the average attendance for the regular season over the last 3 seasons was 8,299 people. This only falls behind two Canadian teams in Toronto and Calgary, a marketing giant in Colorado and one of the longest standing teams in Buffalo, New York (and this is still higher than the three time Champion Rochester Knighthawks who averaged 7,352 over the same period).

The Swarm said in their release that they would announce where the team would be moving in the near future. The most probable places the team would likely be moving to are Nashville, Tampa, and possibly Winnipeg. Nashville seems to have the most traction in many areas but after the loss of the Orlando Titans in 2010 Tampa has a shot with the newly found success of the Florida Launch in Boca Raton. Winnipeg seems to be a long shot but could possibly be the best place for a team struggling with generating money. The MTS Centre is a smaller arena than the Xcel Energy Center and is in an area that has an established Junior Box Lacrosse community that centers around the Manitoba Blizzard who play in the Rocky Mountain Lacrosse League at the tier “B” level.

The Swarm are going to be missed wherever they end up and the fans in Minnesota will miss the fun and energy that the team brought over the last 11 seasons. Farewell to the players that had any stints with the Swarm you were all beloved by the fans and will always have a place here in the Land of 10,000 Lakes.