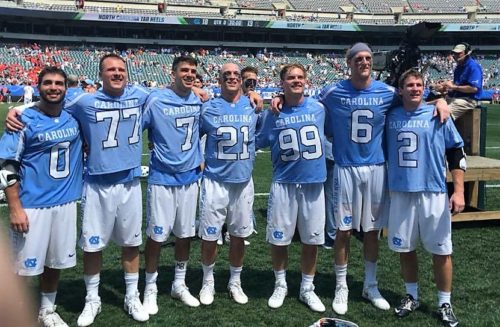 In the opening game of the NCAA Final Four weekend, we had the U.N.C. Tar Heels defeat the Loyola Greyhounds 18-13.  This game was not as close as the score indicates.

Chris Cloutier (So.) scored nine goals overall, tying the all time mark for goals in a playoff game.  Six of the nine were scored in the first half alone as the Heels led 14-5.  Pontrello, Kelly, Goldstock all scored twice to help the Tar Heel attack.  Brian Balkam made seven saves including a 10 bell save off his head.

Loyola goaltender Jacob Stover was pulled after falling behind 9-2 after the first 15 minutes for Grant Limone.  Both let up nine goals.

UNC took a 14-5 lead at the half, but Loyola made a valiant attempt at a comeback, outscoring the Tar Heels 8-4 in the final 30 minutes.  But it just wasn’t enough.

Tyler Albrecht and  Zach Herreweyers each had three goals for the Greyhounds.

North Carolina went on a run in where they scored five times on five shots, and also scored three times in 15 seconds.

North Carolina will go to Championship Monday for the first time since 1993.

They will face the winner of  #1 Maryland vs #5 Brown.