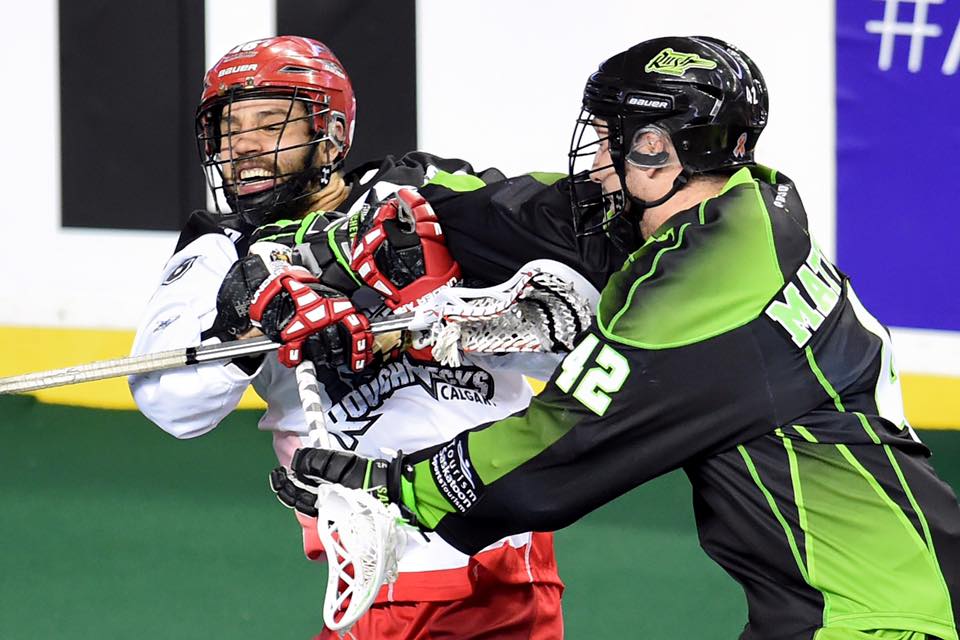 It may have been preseason, but don’t tell that to the 12,000 plus fans who packed into the SaskTel Centre on Friday night to watch the Saskatchewan Rush defeat the Calgary Roughnecks 9-6. With moments remaining in the fourth quarter a brawl broke out that included both the team’s goalies.

Greg Harnett was sent to the box late in the game for five minutes after it appeared he targeted the head of Travis Cornwall on the Rush. From there, things got wild, and it could carry over into the regular season if the league decides to suspend anyone.

A line brawl ensued, including Robert Church squaring off with Dan MacRae, and eventually it led to a midfield fight between Rush goalie Aaron Bold and Frankie Scigliano of the Roughnecks. Bold had played the entire game for Saskatchewan and Scigliano, the team’s usual starter, played second half action after second year player Christian Del Bianco handled the first two quarters.

Both goalies exited the game with 31.5 seconds remaining, and the Rush played the final moments without a goalie in net as Jeremy Thompson held onto the ball to close it out.

Church led the way for the Rush with three goals and was named the first star of the game. However it was the Roughnecks who lept out to a 2-0 lead with a goal from Karsen Leung moments after Rush rookie Ryan Keenan rang a shot off the post, and Dane Dobbie scored at the goal mouth a few minutes later.

Calgary led 5-3 at the half as Church and Adam Jones scored to cut the four goal deficit, and Ryan Dilks scored the opening goal of the third quarter for Saskatchewan. Scott Carnegie extended the Riggers lead before Church scored his second, and it was a one goal lead for Calgary heading into the final frame.

Rookie Matt Hossack tied the game at six, but minutes later transition player Adrian Sorichetti would be called for a five minute major for roughing call. Mark Matthews drew a call however, and in four on four play, Jones gave the Rush their first lead of the contest, 7-6.

Saskatchewan would score the last three goals of the game with the final tallies coming from Matthews and Church, and Bold would shut out the Roughnecks in the last quarter of play.

The final score rarely matters in preseason, and usually teams are just working out their kinks, but in such a heated rivalry, this is a game that might in the minds of the Rush and Roughnecks the next time they meet during the regular season.