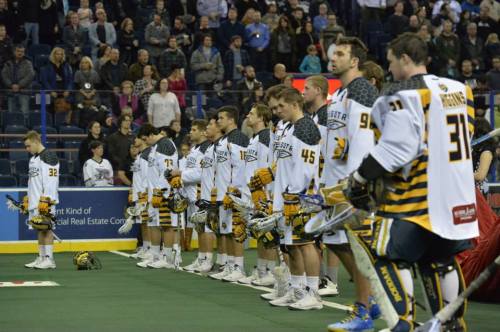 The Minnesota Swarm are continuing their tendency of blowing up somewhat settled, and fan favored, items of the organization. Over the last few years things have gone downhill for the Swarm, they have not made it to the playoffs since the 2013 season where they lost in the Division Finals to the eventual Champion Rochester Knighthawks. Due to this lack of making the playoffs and the overall dismal record over the last two seasons the Swarm’s general manager, John Arlotta, decided to not renew any of the contracts for Joe Sullivan, Aime Caines, and Rory McDade. (Bobby Keast was fired early in the season).

Joe Sullivan was the head coach of the Swarm from 2012- 2015 seasons, he took over part way through the 2012 season when Arlotta fired Mike Lines. Sullivan garnered a 25-41, in 66 games, record which is the most games coached in the team’s history. Sullivan is also the coach in the team’s history to win a playoff game, he has a 2-2 playoff record. Sullivan has been an outstanding head coach for the Swarm over the last four seasons. He was able to get two teams to overachieve in back to back years and make it to the Conference Finals in 2012 and 2013. Unfortunately for Sullivan there has been a huge and overwhelming push for the Swarm to only draft young players and then get rid of many if not most of those same players when they get to certain point in their career. This has made getting a good mesh of players to gel in the ultra short preseason of NLL, this then shows up in the team having rough starts and then not getting going tell late into the season. Sullivan had a raw deal the last two seasons.

The loss of Aime Caines will be a harder hit to the lacrosse community in Minnesota than the loss of Sullivan. Caines coaches a number of youth teams, the University of Minnesota’s MCLA team, the East Ridge High School team and runs Play Like a Pro Lacrosse an athletic training company based in Minnesota. Caines also has done a lot to further lacrosse in Minnesota by coaching and by teaching parents and coaches. Caines joined the Swarm as an assistant coach in 2010 and was instrumental in the creation of the Swarm’s Youth Box League (the only box lacrosse league in Minnesota for youth players).

Unfortunately Rory McDade was in his first season with the Swarm. McDade played four seasons for the Swarm, in the early days of the organization, and was a solid forward for them during the first playoff runs by the team. McDade is also the Head Coach of the Burnaby Lakers of WLA.

Minnesota’s management has made a habit of going young and maybe that is the idea behind the moves here but it seems to be the wrong moves. The Swarm have consistently traded away “veteran” players for draft picks, even more so over the last few seasons. Now it may be a coincidence but it seems that when the push for youth was when the team started to struggle. When things aren’t working then finding a new idea is only thing that can be done, although getting rid of the most successful coach the team has had might not have been best new idea in the hat.

All the Swarm faithful can really do now is wait and see who comes in to take over and what he can bring to the Land of 10,000 Lakes.