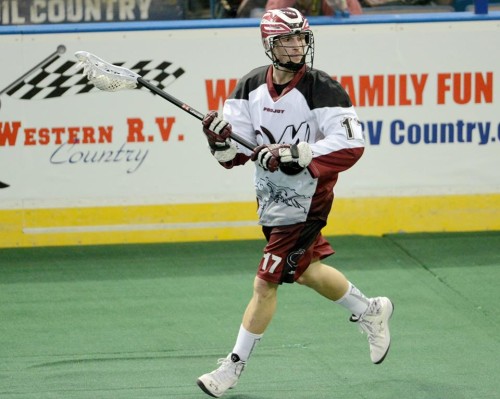 The Colorado Mammoth (3-0) put their undefeated record on the line tonight as they travel to Vancouver to take on the Stealth (1-1). Both teams are coming off big wins last weekend—Colorado bested the Buffalo Bandits 15-14 in overtime while Vancouver took out the defending champion Saskatchewan Rush 13-11 as a result of a 4-0 fourth quarter outburst.

The Mammoth have simply been outgunning opponents so far this year, scoring 16.7 goals per game. Expectations were high for this group to score a lot, with the likes of John Grant Jr. (18 points), Adam Jones (23 PTS), Jeremy Noble (16 PTS), Eli McLauglin (6 PTS) and Callum Crawford (23 PTS) all capable of taking over games.

Add in defending Transition Player of the Year Creighton Reid (4 PTS) and emerging sniper Chris Wardle (6 PTS) and it looks like this is probably the most dangerous offensive unit in the NLL.

On the the end of the floor the Mammoth aren’t looking quite so amazing. They’ve given up a league-worst 14.3 goals per game. Robert Hope (34 loose balls) and Greg Downing (11 forced turnovers) are doing what they can to hold down the fort, but the reality is that goalies Dillon Ward and Alex Buque haven’t been getting much help from the defensive corps.

Because the defense has been so shaky, the pressure will be on Colorado’s offense to hang another 16 on the scoreboard—anything less and the Mammoth will be in danger of taking their first loss of the season.

Vancouver, meanwhile, has played two very different games to open the season. In their first, the New England Black Wolves handed them a decisive 17-7 loss, but they rebounded last weekend to take out the Rush with a much better effort at both ends of the floor.

The question now is which version of the Stealth we’ll see against the Mammoth.

We’ve gotten used to seeing Rhys Duch lead the Stealth offense and he’s doing it again in 2016 with a team-best 11 points. Not far behind him are Corey Small (8 PTS), who scored five goals against Saskatchewan, and Garrett Billings (8 PTS) who is one of only two players in NLL history to record 100 points in three straight seasons. Both Billings and Small are capable of getting hot and having a big night, as is Logan Schuss (5 PTS) who had a four-point night against the Rush.

Defensively, the Stealth have given up the second-most goals per game (14), behind Colorado, but again, they’ve had two very different games so far this year. If they play like they did against the Rush and can contain Colorado’s shooters, they’ve got a good chance of taking this game. If it goes the same way their season opener against New England went, it could get ugly.

Sophomore goalie Eric Penney (14.43 goals against average) needs to have a second straight big night if Vancouver hopes to stay in this game. If Penney gets lit up, backup Chris Levis can provide adequate relief, but he likely doesn’t have enough game to shut down his former teammates.

The game gets underway at 10:00 p.m. ET at the Langley Events Centre.