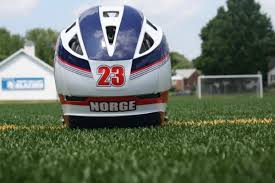 The Norwegian participated in the Scandinavian Lacrosse Challenge in May. The tournament was held in Stockholm Sweden between Norway, Finland and the hosts Sweden. Norway ended up losing both games but they played well and kept both games close. They lost to Finland 5-4 in overtime and then they lost to Sweden 12-6 after a massive improvement by Sweden, who won the tournament. This tournament was a testing point for the Norwegians especially after the team announced its roster on January 24th of this year, only losing out to Wales and Israel as the first team to announce a roster.

The Players to watch out for are Lars Rysst and Thomas Laycock both very good offensive threats. Rysst is a midfielder that plays for the reigning Norwegian Champions NTNUI, while Laycock is an attackmen that plays for the more well know Oslo Legends.
The Norwegians are playing in the Green Division along with China, Italy, and the Netherlands. Unfortunately for Norway they are falling in to a group with a very strong Dutch team, a Italian team that is looking to show better than 2010 and a newcomer, impressive looking Chinese team. They will start the tournament off with Italy at 1pm EST on July 11th.