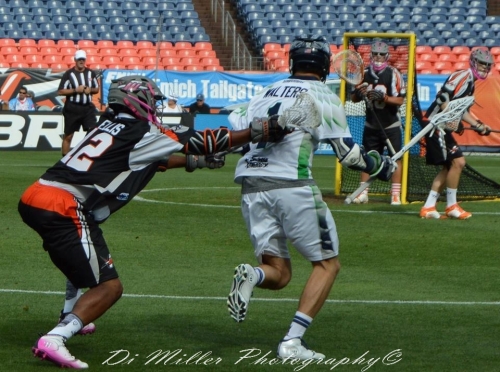 On September 2, the Colorado Mammoth drafted Terry Ellis in the fifth round 42nd overall in this year’s NLL Entry Draft.  So just what does Ellis bring to the Mammoth?  He’s already played at the professional level having been drafted by the Denver Outlaws in the seventh round of the MLL Collegiate Draft held this January.  He played two games for the Outlaws in 2014 and showed his skills as a defensive midfielder defending some of the best veteran players in Major League Lacrosse.  At 6’1” and 205 lbs, he has speed; an extreme knowledge of the game; and with all his talents, you wouldn’t know that he didn’t start playing lacrosse until his sophomore year in high school where he achieved All-State and All-Conference honors in his Junior and Senior years.  During his high school career he broke school records for points in a season with 78; points in a game with 10; and points in a playoff game with nine.

Having only played field lacrosse, moving to box lacrosse could be a challenge for the NLL rookie.  Going from a long-pole to a short-stick is a huge transition considering you are taking away that advantage of being able to defend an opponent from a longer distance.  In Ellis’s case, I think he will overcome that quickly.  Because of his speed and the constant transitioning of players throughout box lacrosse, he’ll be quick to get on and off the floor; and get after the opponent.  In addition, having played with the Outlaws, he has the advantage of knowing how Eric Law; Michael “Tree” Simon; John Grant Jr.; and Cam Holding play which gives him a bit of an edge over the other draft picks.

With the veteran players already signed; the MLL players who were drafted; and the other six rookies drafted by the Mammoth, they’ve got an extremely huge pool of talent to draw from.  It will be a tough decision for the coaching staff of the Mammoth to decide who makes the cut.  However, with the strength he possesses; his love of the game; ability to get ground balls; and caused turnovers these talents can all be keys to the Mammoth’s success.

Ellis made that cut with the Outlaws by showing them just how strong a player he can be.  During training camp this fall, I see him doing the same, getting after it, and proving to the Mammoth that he’s an asset to the team and could very well be playing for the Colorado Mammoth for the 2014-2015 season.