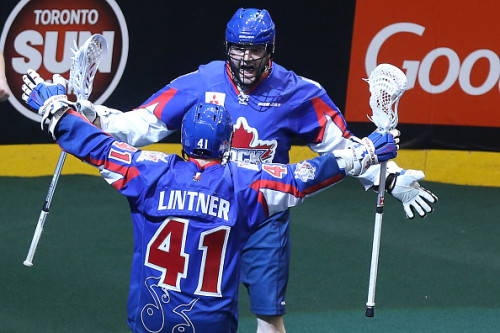 The National Lacrosse League season is just around the corner, and teams have finally narrowed down their rosters. There is a lot to be excited about, but here are just a few things to keep an eye out for.

One of the biggest stories out of training camp is a trio of Major League Lacrosse players joining the Toronto Rock in league MVP Tom Schreiber, Connor Buczek, and former rookie of the year, Kieran McArdle. MLL talent has donned the NLL carpet before, but never so many of that level on the same team, and never on a Canadian roster such as Toronto.

All three of them impressed in camp enough to make the team, and the Rock are already in a rebuilding state. Gone is Josh Sanderson and Colin Doyle, and in are the Americans. Rob Hellyer is also out for an extended period of time, which means young players such as Mike MacDonald and Dan Lintner will also be relied on.

New England is a Power House

Last year New England started to look like a contending team, making it to the eastern semifinals, and 2017 might be their year. It’s the third season of the organization in Connecticut, and they’ve already shown a commitment that was lacked in Philadelphia.

With Pat Saunders signed to an extension, the Buchanans in their prime, and Shawn Evans now in his second year playing at Mohegan Sun, there’s no reason to believe the Black Wolves will take a step back. The addition of Chad Culp to the offense only helps, and having players like Jay Thorimbert out of the back door to help the 2016 goalie of the year Evan Kirk can’t hurt.

It’s not the most glamorous group of rookies, but they are still interesting to watch. Ryan Keenan and Mike Messenger are on a stacked Saskatchewan team, for starters, and players like Latrell Harris on Toronto and Conor Sellars on Georgia are going to get some decent playing time.

Kyle Jackson on the Knighthawks also had a steady camp and is going to spell Cody Jamieson early on in the season while Rochester still has enough depth to get by.

The Swarm continue to overturn its roster, and this time it looks different again. However, it is Mike Poulin, one of the team’s only free agent acquisitions in recent memory to a major deal, who will be taking the crease this season.

Jordan Hall is another veteran addition that should help what was already an emerging dynamic roster last season.

John Ranagan was signed after being cut from Black Wolves camp to help with the back end, and between him, Sellars, and another rookie in Leo Stouros, it’s going to be an interesting backline in Georgia. For an eastern conference that’s starting to see a shift in power, the Swarm could become contenders.

The Stealth are yet to make a postseason run since moving to Vancouver, but the offensive depth looks better than ever, and defensive additions such as Peter McFetridge are only going to help a backstop in Tyler Richards looking to stay healthy this year.

Who Can Stop the Rush

As per usual, the Saskatchewan Rush roster is stacked and it’s hard to find a flaw. Aaron Bold is one of the best goalies in the league, the team has the best defense in the league, and the offense has no holes, even with Zack Greer out in Colorado.

Adam Jones, one of the most prolific goal scorers, is back and with him coupled with the return of Curtis Knight from knee surgery, it’s hard to say who is going to slow down the momentum in Saskatchewan.

Which is good news for a fanbase that can send out over 12,000 fans to a preseason contest.