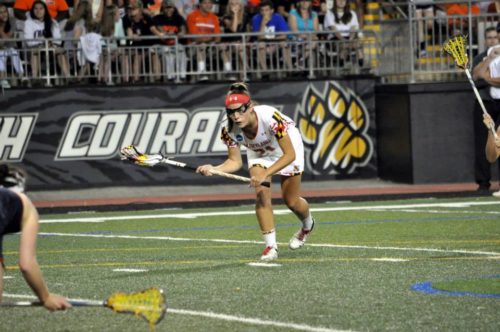 The NCAA Women’s Lacrosse Championship Weekend is full of familiar teams with the Nos. 1, 2 and 4 seeds advancing to the National Semifinals with one unseeded team, Penn State, crashing the party. Friday’s games feature No. 3 North Carolina against Penn State at 5 p.m. followed by No. 1 Maryland against No. 4 Syracuse in the nightcap at Talen Energy Stadium in Chester, Pennsylvania. Both games can be seen on ESPN3.

The Nittany Lions have used an impressive run to reach their first Final Four since 1999, beating Winthrop, No. 2 Florida and No. 7 Penn to improve their overall record to 14-6. Penn State is vying for its first appearance in the National Championship Game since 1989.

Madison Cyr has led the offense with 80 points on the season (57 goals, 23 assists) while Steph Lazo isn’t far behind, currently owning 70 (33 goals, 37 assists). Emi Smith has started all 20 games in goal, owning a 9.86 goals against average and .441 save percentage. Last time out, the Nittany Lions took a 6-2 halftime lead over Penn, on their way to an 8-4 victory. Cyr led the offense with two goals and two assists while Smith made eight saves in goal. A week prior, Penn State pulled out a thrilling 14-13 overtime win over second-seeded Florida, as Lazo scored the overtime game-winner and Cyr tallied a game-high six points (four goals, two assists).

Penn State will face a North Carolina team familiar to Championship Weekend; the Tar Heels have advanced to the semifinals in three of the last four seasons, making it to the National Championship Game on each of those occasions (2013 and 2015). This season, UNC has beaten a pair of ACC foes in the NCAA Tournament, defeating rival Duke (15-10) and Notre Dame (10-6) to improve to 18-2 on the season. The Tar Heels’ only two losses have come by a single goal to the eventual top two seeds in the NCAA Tournament, Florida (16-15) and Maryland (8-7).

In its most recent game against Notre Dame, Marie McCool posted a hat trick while Molly Hendrick scored two goals and Megan Ward had eight saves. Six of Ward’s saves came in the first half to help North Carolina take a 6-4 lead after 30 minutes of play. For the season, Hendrick leads the offense with 67 points (55 goals, 12 assists) while Ally Messinger owns 59 (31 goals, 28 assists). In the end, five different Tar Heels own at least 50 points to pace an offense that has scored 13.7 goals per game. Caylee Waters has started 14 games in goal, tallying a 7.72 goals against average and .476 save percentage. Ward has started six, with an 8.54 GAA and .493 save percentage.

Syracuse and Maryland square off in the nightcap in a rematch of last season’s semifinal. In that game, the Terrapins scored the game’s first three goals, but the Orange responded to take a 5-4 lead. Maryland came back with five of the next seven goals to take a 10-6 advantage before Syracuse scored the game’s final two goals to pull closer. Overall, Maryland has won 52 of its last 53 games with the lone loss coming against Ohio State in the 2015 Big Ten Tournament. The Terrapins are 21-0 this season, were 21-1 last season and 23-1 in 2014. They are vying for their third straight National Title and fourth straight appearance in the National Championship Game.

In this year’s NCAA Tournament, Maryland has defeated Johns Hopkins (14-8) and UMass (18-3) with two close calls in the regular season, beating North Carolina (8-7) and Penn State (10-9). The Terrapins would play one of those teams in the finals if they defeat Syracuse Friday.

Meanwhile, Syracuse stands 19-5 overall, coming off a pair of one-goal wins in the NCAA Tournament, 7-6 over Stony Brook and 12-11 over USC (in overtime). Kelly Cross scored the overtime winner over the Trojans, her second goal of the game. Halle Majorana led the way with six points (three goals, three assists) while Kayla Treanor tallied five (three goals, two assists).

For the season, Treanor leads the offense with 89 points (49 goals, 40 assists) while Majorana has recorded 76 (43 goals, 33 assists) and two others have eclipsed 60 points. Treanor also has an astounding 206 draw controls while goalkeeper Allie Murray leads the way with 58 groundballs. Murray has recorded a 9.00 GAA and .396 save percentage.

The National Championship Game could feature many intriguing storylines. Maryland and North Carolina could face in the finals for the third time in the last four years, with the Terrapins winning a one-goal thriller last season and the Tar Heels pulling out a triple overtime thriller in 2013. Maryland also played a competitive one-goal game against Penn State in the Big Ten Tournament. Meanwhile, Syracuse and North Carolina played a back-and-forth 15-14 thriller in this season’s ACC Tournament, after playing a 12-11 game in the regular season.