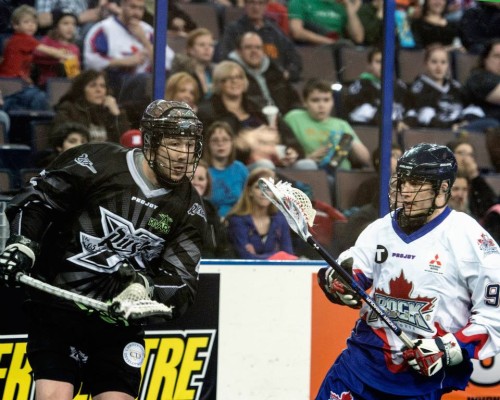 The Edmonton Rush won the Champion’s Cup this weekend, their first title in their 10-year history. And so ends the 2015 NLL season.

So let’s now have a look back at the season that was, and some of the highlights along the way.

The season got off to an unexpected start in the first two weeks of the schedule when the three-time defending champion Rochester Knighthawks lost two straight, the West Division champion Calgary Roughnecks lost two straight, and the Edmonton Rush—who set the record for most consecutive wins (14) to start a season in 2014—also lost two straight. Meanwhile, the newly relocated New England Black Wolves won their first two home games, including a 17-7 beat-down put on the Knighthawks.

Week 3 had just a single game on the docket, a 14-13 win for the Buffalo Bandits, but in Week 4 things began to look a little more normal, as Rochester held the Toronto Rock to just six goals en route to their first win of the season and the Edmonton Rush decisively defeated the Roughnecks by a 16-8 score.

For the Knighthawks that first win seemed to shake them out of the early-season funk as they then won six of their next seven games, the only loss being a 7-6 overtime defeat at the hands of the Minnesota Swarm.

For Edmonton it seemed the return of head coach Derek Keenan sparked the team after he missed the first two games while on bereavement leave following the death of his wife the day before the season started.

Keenan’s presence behind the Rush bench had been just one of several concerns for Edmonton prior to the season. Curtis Knight, who was second on the team in scoring in 2014 (72 points), was injured and would not play in 2015. Could the return of Corey Small from injury after missing the 2014 season fill that hole? Would rookie Ben McIntosh be able to live up to the pre-season hype about his skill level?

But once Keenan was back, the Rush turned things around, winning four in a row to get things back on track. McIntosh would finish the season with an impressive 86 points. Small got off to a slow start, picking up four points in two games before being moved to the Vancouver Stealth where he went on to set a career-high for points in a season (75 between Vancouver and Edmonton).

For Calgary and their surprised fans, losing in Week 4 set a new team record for consecutive losses to start a season as they had never dropped more than two in a row out of the gate. The Roughnecks would go on to drop three more before finally earning their first victory, placing them in dead last in the NLL and so far behind the rest of the pack that just getting back into playoff contention seemed unlikely.

The Toronto Rock, in the meantime, were busy building a big lead in the East Division. The Rock entered the season with a number of questions to answer. What would become of the offense with both perennial 100-point man Garrett Billings and the second all-time scorer in league history, Colin Doyle, both out with injuries? Who would emerge as the No. 1 goaltender between veteran Brandon Miller and young Nick Rose? Would the offseason acquisitions of Brodie Merrill and Brock Sorensen shore up the defense?

Any concerns Rock fans might have had before the season disappeared quickly as Toronto went 9-1 to open the season. They were held under 10 goals just once in that period (by the Knighthawks, as noted above) while holding opponents under 10 three times during that period, including giving up just four goals to the Swarm in Feb. 13 win.

Without Billings and Doyle, the team turned to Josh Sanderson to lead the team and lead he did, picking up 66 points in those first 10 games, including a 10-point effort against the Rush on Feb. 27 and a 13-point game against the Stealth on Jan. 10. Serving as the table setter, Shooter helped Rob Hellyer get off to an outstanding start to the season, picking up a whopping 71 points in the first 10 games.

And Brett Hickey, who had managed to get into just nine games over two seasons with the Stealth, had 26 goals after 10 games, en route to a 50-goal campaign.

Things weren’t going so well in Minnesota. After an encouraging 2-1 start to the season, the Swarm only won one of their next eight games. Callum Crawford missed four games during that slump, 2014 Rookie of the Year Logan Schuss was eventually traded to Vancouver for Johnny Powless, and team captain Andrew Suitor was traded to New England for Joel White and a second round pick in 2017.

With all the changes and challenges, Minnesota was held to fewer than 10 goals on nine separate occasions and set a league record for futility on April 4 when they scored  just twice against Matt Vinc and the Knighthawks. They would finish in fourth place in the East Division, winning only six games.

After the quick start for the Black Wolves, the wheels fell off. They would get blown out in their next three games, dropping each one by at least five goals and they would limp to a 4-14 record. Goaltender Evan Kirk struggled all year long, posting a 13.55 goals against average.

In the middle of it all in the East, the Buffalo Bandits were quietly putting together a solid season, starting the year with a 7-7 record, with strong contributions from Ryan Benesch and Dhane Smith, who would both finish the year at career highs for points (113 and 107, respectively).

The trade deadline at the end of March saw a bunch of activity, including some blockbuster moves.

As noted above, the Swarm sent Suitor to New England for White and a draft choice and then dealt Schuss for Powless as their eternally ongoing rebuilding movement continued on.

An even bigger deal was in the works, though. Garrett Billings was due to come off the Injured Reserve list and Toronto had yet to officially sign him to a new contract, making him a Restricted Free Agent. Rochester put in a qualifying offer on March 27 which Toronto was forced to match or lose him entirely. After resigning Billings to a two-year contract, the Rock immediately traded him to New England for former first-overall pick Kevin Crowley.

Still looking for some added rightie depth, the Knighthawks then picked up Joe Resetarits fro the Bandits for Jamie Batson, plus an exchange of some draft picks.

All the deadline moves didn’t change much in the standings, but a move from a couple weeks earlier was having an effect in the West Division. Second-overall pick Jeremy Noble had refused to report to Rochester so, on March 13, they finally dealt his rights to the Colorado Mammoth. Noble and the K’Hawks’ third round pick in 2017 were given to Colorado in exchange for a third round pick in the 2015 draft as well as first round picks in 2016 and 2017.

Noble’s arrival didn’t disappoint. Noble had a seven-point night in his NLL debut and went on to pick up 39 points in just nine games played. The Mammoth won four in a row with Noble on the roster after starting the year 4-5 and the improvement pushed them into a stranglehold on second place in the West.

Also of note for Colorado, John Grant Jr. continued to work his way further into the record books when he moved up into second place in the all-time scoring list on April 17.

The final piece of the playoff puzzle was the third and final postseason berth in the West Division. The Roughnecks had begun a slow climb towards respectability after earning their first win of the year in late February, but they didn’t really hit their stride until the last month of the season when they won four of their last five games.

The Stealth, meanwhile, were in a tailspin. At midseason, they were tied with Colorado at 4-5. The injury bug hit hard, putting goalie Tyler Richards and defenders Chris O’Dougherty and Tyler Burton out for extended periods, making an already thin backfield even thinner. The Stealth would manage only a single win in the second half of the schedule.

The Stealth’s final loss of the season came in literally the last game of the NLL regular season. Had Vancouver won that game, they would have made the playoffs. Instead, they were beaten 14-13 by the Roughnecks who claimed the third and final playoff spot by virtue of that victory.

Calgary was powered all year long by the exceptional play of Shawn Evans, who smashed the single-season scoring record in the NLL, recording 130 points and tying for most assists in a season (83, a record set earlier that day by Josh Sanderson). Evans was never held to fewer than four points in any game in 2015 and should be a cinch for the MVP when the individual awards are announced later this year.

Calgary wasn’t finished winning, however. In the first round of the postseason, they earned a convincing 11-6 win over the Mammoth who had struggled in the home stretch, losing their last four regular season games.

In the east, Rochester was working on winning their fourth straight Champion’s Cup. After a 12-6 regular season, they put away the Bandits 14-11 in the Division Semi-Finals.

That was as close as we would get to seeing a Roughnecks-Knighthawks rematch in the Finals, however. Although both Division Final series required a tie-breaking mini-game to decide the victor, the Rock, with the best regular season record in the NLL and the Rush, with the second-best record, came out on top, setting the stage for the first-ever all-Canadian Champion’s Cup.

The Rush, who had gone 13-3 after the return of Keenan, crushed the Rock in Game 1, winning by a 15-9 margin. Game 2 was a nail-biter, with a couple exchanges of the lead, but Edmonton grabbed the lead for good with just a minute and two seconds left on the clock, earning an 11-10 win and their first championship in team history.

During the playoffs, news emerged that the Swarm were relocating to Atlanta and that there is a good chance that the Rush will also be moving this summer. That news cast a bit of a pall on the postseason, but did not diminish the excitement of the games.

Now the NLL goes on hiatus for the summer and fall. Teams will spend time re-evaluating their rosters and trying to make moves to get better. They’ll also be spending time prepping for this year’s entry draft which is said to be one of the deepest in league history.

But for now we can reflect on the season that was, the highs and the lows, and start looking forward to how things will play out when the ball drops again in 2016.