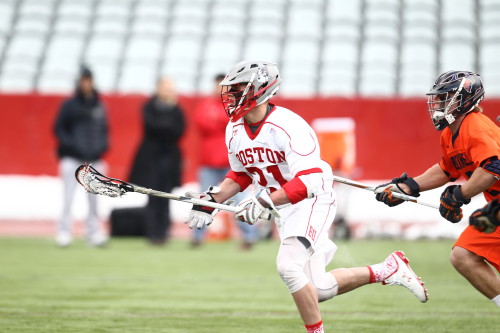 In just its second year as a division one program, Boston University found itself ranked. The Terriers exploded in the first half of the season, going 6-2 before losing its last six contests in the year. Despite finishing with a 6-8 record, Boston University became a team with the ability to contend in the Patriot League.

“I don’t know if it’s expected, but it shows how far the program’s come.” said head coach Ryan Polley of being ranked last season. “We were honored to be ranked last year, even for one week. After going 6-2 and that was great recognition for the program and it showed the steps we were taking.This is just another thing that coaches are out there who think we are a top 20 team. Only time will tell, but this team has the potential to be a top 20 team and the potential to take a step back.”

Boston University will play two more pre season contests this weekend before they will open the regular season on February 8th against the Providence Friars.

“I think we have to focus on both (starting and finishing strong) and focus on just getting better as the year progresses.” said Polley of the slow finish to last season. “Certainly its something we thought about a lot as a coaching staff, what happened and what went wrong. Frankly, we played a lot of good teams. We played Duke, we played Loyola and Harvard, and Holy Cross has a good year, so it’s not as if we were playing lower teams in D1 and losing games.

“Every team that we played was a high quality team we were on the short end of a couple close games. We have to figure out a way to make sure we win those games. We don’t want to freak out and say everything that we did was wrong, there were a lot of really positive things and we just have to tweak a few things. We went light in the fall as we tried to look at it as a full season and a season that’s going to take a lot out of our bodies, and save our tanks for late in the season. Training a little bit lighter this spring, but we have to get better every single day and we have to work hard and continue to progress”

The team had three players named pre-season all-conference players by Inside Lacrosse; Cal Dearth, Sam Talkow, and Christian Carson-Bannister. In a conference that has been filled with Major League Lacrosse draft picks, the Terriers have some star power as other teams have lost their best to the pros.

“We are very excited and proud of their accomplishments.” said Polley. “They’ve done a lot of great things over their first two years and it’s nice recognition for the program and certainly the individuals. It shows the progress made. We are really excited about it, but at the same time it is a pre season honor. We’d rather it be post season and have those guys have tremendous junior years.”

Talkow is one of the top faceoff men in the country, and he has to face off against some of the toughest FOGOS in the Patriot League alone, including Brady Dove of Navy and Graham Savio of Loyola. Of players who will return to college lacrosse this season, only two of them bettered his 66% rate in 2015; Trevor Baptiste, otherwise known as the succeeder to “the Beast” nickname of Greg Gurenlian, and Ben Williams of Syracuse.

“The Patriot League, for my money, is the best faceoff conference in the country. We have 4-5 guys in the top last year. Every week’s a battle. Sam’s just a great player, he works very hard at his task. He’s done a great job for us these first two years. Our success playing our best lacrosse has Sam at the center of that. Not only is he a faceoff guy, he’s a great lacrosse player and a good athlete. He’s good off the ground, tough and competitive, and a good offensive player when we get possession.”

Polley also credits the 23rd ranked offensive numbers in the nation to the strong faceoff work by Talkow. Last season the Terriers early success was due to the offense, and the coach believes this has to do with Talkow’s efforts. Four of the top 15 faceoff percentages came from Patriot league FOGOs. FOGO may be an unfair term for Talkow, who gets his points. He is more of an offensive threat than maybe any other faceoff man in the country.

“It all starts at the faceoff X with Sam and Elliott [Burr]. They did a great job last year and we were able to possess 65% or higher as a team with faceoffs. We had the ball a lot. We had someguys have break out years. Having the ball from faceoffs and good defense with Christian Carson-Bannister and I think it just comes down to executing”

The Patriot League will, for the first time in years, return all of its head coaches from the previous year. The conference has become a hallmark in the country since Loyola emerged as a top team in 2012, one of its first years in the Patriot League.

“I think this year is going to be about who the best team is.” Polley said. “I think Colgate rose to the top [last season] because they had two of the best three players in the league with [Ryan] Walsh and Clarkson. Navy was so good defensivley and with faceoffs, and they have everyone back. We’ve been thinking about pre season player of the year, and a couple guys stood out but last year Army had Glesener, and there was Pontrello (Loyola) and Navy has big time starters who have been playing for three years and have multiple all conference guys. We have Sherlock (loyola), and some other great players, but its really about who the best teams are. We think we were strong in pre season and we are just really excited to compete and we want to work our way up in the conference. Every team is a little bit different and has great players. Some of the more high profile players graduated, but there are certainly underclassmen who waited their turn who are great players. Maybe not household names, but some great players”

The Terriers offense is strong, and it has to do with the explosive 2015 season of Cal Dearth, and also freshmen Jack Wilson and Ryan Hilburn breaking out with 40 point seasons each.

“We have Cal [Dearth] up on the midfield, who is a great feeder and lacrosse player. He makes everyone better. We are going to continue to be athletic in the middle of the field and create opportunities.”

BU didn’t have a heavy fall ball schedule, unlike some teams who played in major tournaments. Instead, BU faced two division one teams in January and a division two team in Merrimack. The Terriers played only McGill in October, and Polley said there was a strategic reason behind that decision.

“We went light in the fall as we tried to look at it as a full season and a season that’s going to take a lot out of our bodies, and save our tanks for late in the season. Training a little bit lighter this spring, but we have to get better every single day and we have to work hard and continue to progress”

The team’s freshman class has already impressed in pre season play. Tristian Ruh, a late recruit from the fall, scored twice in the exhibition against Bryant this past Saturday. James Burr scored six times in the game against McGill, and both of them should be major contributors to the offense in 2016.

“It’s a very deep class.” said Polley. “It was the first class that we were on time with in regards to the recruiting cycle. We worked very hard, it was kind of our focus class. 2013 was getting the program off the ground, 2014 added depth to our team, but really the 2015 class was always our focal point. We did that to add depth to a lot of positions and kind of added competition across all spots. We are very pleased with it right now We anticipate a couple guys started and a couple of major contributors.”

The growth of the program has relied on players outside of traditional New England markets. While programs such as Loyola, Navy, and Army have produced dozens of professional players, Boston University will not have the opportunity until at least the 2017 MLL or NLL drafts when attackman Ryan Johnston will be available.

“With so many people playing lacrosse, youth and high school, there’s a higher selection with untraditional places becoming factors. california, Texas, Florida. On our roster our faceoff guy is from Florida and goalie from Texas. We have guys from Cal helping us, Canadians, just a variety and strength of players. It wasn’t like that ten years ago. You had your top tier and there was a dip. You’re able to recruit, there’s only 70 jobs. BU is a great instituion and kids want to come here and play in the patriot League and help us build this thing. There’s a lot of great players out there and they cant all go to top 20 programs.

“Its been a perfect storm.”