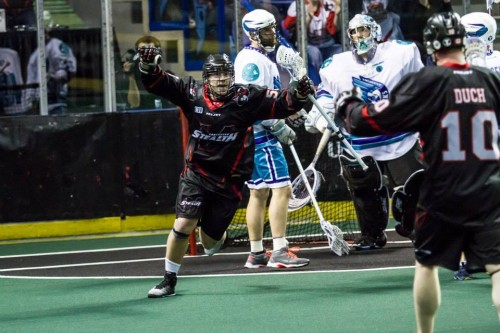 The 2016 National Lacrosse League schedule has arrived. That means us lacrosse fans have circled 18 weekends on our calendars reserved for watching as many games as possible (and attend some, if we’re lucky).

Often times when the National Football League schedule is released, sports websites and analysts will try to predict the outcome of every game. I teased about this on Twitter but, it is far too early to predict every NLL game (maybe someday). Instead, we will highlight a few important dates to watch and circle on your calendar twice.

The first NLL game of the season will be the Georgia Swarm’s first ever game as well. They will travel to Colorado to face the Mammoth for a late night game on New Year’s Day.

The first game in the history of the Saskatchewan Rush will be also be familiar. The team formerly known as the Edmonton Rush face their old “Battle of-” errr “Clash of Alberta” rivals in the Calgary Roughnecks. It is also our first look at the defneding champions.

This will be the first home game for the Georgia Swarm who will host the Toronto Rock at their Gwinnett, Georgia home.

The first game for the Buffalo Bandits without John Tavares as a member of their team. He’s a coach for them now, but this will be the first time he’s ever not been on their roster as a player in some capacity. This is the NLL’s first season without Tavares playing since 1992.

A Thursday game is always an attraction. This is the second year in a row that the Rock are hosting a mid week game and it is one of two Thursday games in the NLL this season overall.

Saskatchewan will host their first ever game on January 15th when they host the Vancouver Stealth. Will they raise a banner or celebrate the 2015 championship in some capacity? Possibly. This is also the first ever NLL game in Saskatchewan.

Here’s another Thursday game, and this time it will be the Colorado Mammoth hosting a late game. Their visitors will be the Saskatchewan Rush. This is the last of the 2016 mid week games.

Two Valentine’s Day matinees and the only holiday NLL games fall on this season other than New Year’s Day. In game one, which starts at 2:05pm, the Bandits will travel to Gwinnett and the Toronto Rock will play against the New England Black Wolves at 3pm.

This one is kind of weird. Normally, I’d love to highlight this game because it is the first time Callum Crawford will face his former team on the road, but the Swarm aren’t really in Minnesota anymore. This is a highlight if you are sensative enough to sentiment where it doesn’t matter.

The last game of the regular season will pit the Knighthawks against the Black Wolves in what could be a huge late season eastern conference game. It is the only game on May 1st and it closes out the season.