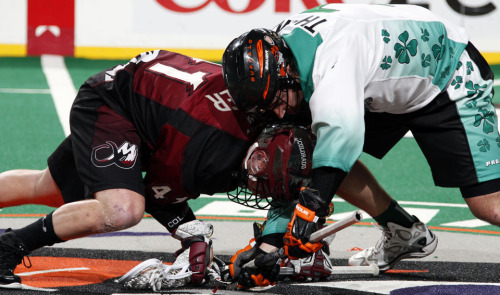 When the Calgary Roughnecks released future Hall of Famer and all time faceoff wins leader Geoff Snider a little over a month ago due to contract disputes it left what many seem to consider a huge hole in the roster, considering Snider has been the main man in faceoffs for Calgary since coming here from Philadelphia.

Now with Snider being the friendly guy as everyone knows him to be and how he finds it hard to control his passion sometimes finds himself in the sin bin for his fair share of over-aggressiveness or giving his opinion to the officials, it’s not like anyone hasn’t taken any draws for Snider in the past, also, keeping in mind Curt Malawsky’s choice to sit Snider a couple times to rest last year forced the coaches hand in giving off the faceoff role to others on the team.
The Roughnecks will have to go back to basic lacrosse and unfortunately won’t have what most teams covet so much, a true faceoff specialist. The Colorado Mammoth have Geoff’s brother Bobby who is just as dominant as his brother in the circle. I know I will miss watching those two battle it out in the middle. I don’t think the Roughnecks will totally suffer though as faceoff wins and losses were not the reason Calgary had such a poor start last season. Along with Snider from the Mammoth, other teams such as the Buffalo Bandits have Jay Thorinbert who was stellar on draws, going 338-513, or defending champs Saskatchewan Rush’s Jeremy Thompson who went 246/475 in last year’s campaign. As a result, the Roughnecks will have to go about faceoffs a different way than most teams and split duties between players.
So, without drafting a specific faceoff specialist or trading for one they will most likely look in house and go with what worked when needed last year and use Curtis Manning who went 22/37 last season and Garret McIntosh who was actually slightly better in faceoff wins to Manning going 24/37 in the middle of the floor.
A few faceoff players do remain free agents, with Bob Snider standing out. However, the Colorado Mammoth have spent a bit this offseason, so they shouldn’t be afraid to retain who might be their top free agent.
I’m not saying the Roughnecks won’t need to win faceoffs as dominantly as Snider used to, but the team has learned to work their style of play around the fact of winning every faceoff nearly being a guarantee and instead play a more physical style of play and make every possession count, and, with all the fire power they have on offence and the ability to make strong defensive stands, this scribe doesn’t believe faceoffs will be do or die for the team this season.