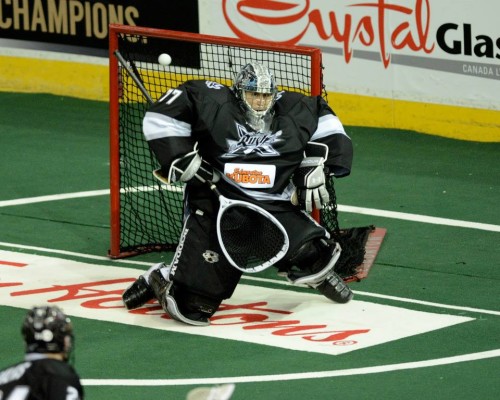 With free agency well underway, many have wondered about the likelihood of Aaron Bold repeating his success in 2016 and leading the Rush on another deep drive into the playoffs. It is no doubt that Bold was the MVP of the Rush last season and much of the credit belongs to him and his stellar playoff success when we look at the Rush’s championship last year.

However, critics wonder if he will be capable of achieving this again. If we look at Bold’s career statistics his best year was 2014 when he went 15-2 with a 8.73 GAA and a .791 SVV%. These numbers dropped off slightly last year when he went 12-5 with a 9.44 GAA and .779 SVV%. While the numbers seem to appear to be a sign that he may regress, there are some other factors to consider.

Bold has much of his returning defensive corps returning.  This only stands to benefit him and the team. Much can be said about the opportunity to play as a unit and gel over the course of multiple seasons. As such, it would be more than likely we would see all those numbers drop based on experience and cohesiveness playing a role with the back end.

Bold is now 30, and it could be argued that he is about to enter the peak of his career in the middle of his playing career. While continually improving and seeing success this only stands to put him in elite company as the Rush look to win championship #2 this fall.

Do I see Bold this year having a season similar to last year? Yes! As well as leading this team deep into the playoffs and giving Saskatchewan a team to cheer for as we drive toward a Championship. Get ready Saskatchewan lacrosse fans, this is going to be one amazing ride! Get ready to feel the Rush!