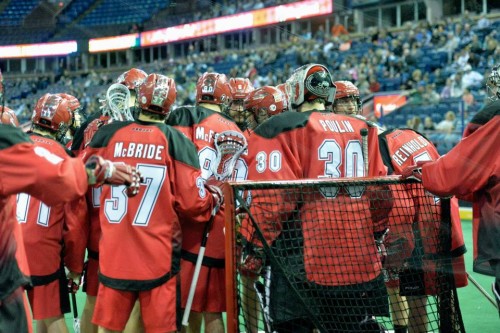 The Calgary Roughnecks today announced the retirement of Andrew McBride from the National Lacrosse League.

“Throughout his career, Andrew has been the consummate Roughneck,” said Roughnecks general manager Mike Board.  “On the floor he played the game hard and honestly. As a captain he provided leadership through his tenacious play and never-quit attitude. Off the floor, Andrew represented the Roughnecks with enthusiasm and passion, his devotion to the Calgary community is truly remarkable. On behalf of the entire organization, I would like to congratulate Andrew on his terrific NLL career and thank him for his commitment to the Roughnecks and lacrosse throughout the Province of Alberta.”

“If you had to choose a player to lead your team and represent your organization, it would be Andrew,” added Roughnecks head coach and assistant general manager Curt Malawsky.  “He has had an outstanding NLL career and is the ultimate professional, on and off the floor, with a level of compete and a work ethic and passion that are unrivaled. The loyalty and dedication Andrew has given the Roughnecks organization and City of Calgary for well over a decade is something you do not come across often.  I am very proud to have played and coached alongside such a great warrior and an even better person who will always be part of the Roughnecks family.”

McBride, a native of Ladner, British Columbia, finishes his 13-year NLL career as the franchise leader in regular season games played (198), playoff games played (29), regular season penalty minutes (387) and playoff penalty minutes (40).  He was selected by Calgary in the second round, 14th overall, in the 2002 NLL Draft and led the team as captain for the last five seasons (2011-15).  The 32-year-old defender has recorded 87 career points (19 goals, 68 assists) and 711 career loose balls over his more than a decade-long tenure with the Roughnecks.  The two-time NLL Champion (2004 & 2009) and two-time NLL All-Star (2008 & 2011) has played at least one game in 13 consecutive playoff seasons, collecting 16 points (three goals, 13 assists) and 96 loose balls over that span.  Most recently, McBride competed at the 2015 FIL World Indoor Lacrosse Championship as a member of Team Ireland.

“It is with great difficulty that I am today announcing my retirement from playing professional lacrosse,” said McBride.  “I am very humbled to have played the sport I love professionally for as long as I have and feel fortunate to have played my entire 13-year career with the Calgary Roughnecks.  It has been an honour to represent this organization and city, especially the last five years as captain, and I will cherish all the memories, particularly winning two championships.  To my parents and wife, thank you for your unwavering support that allowed me to carry on with what I can only say feels like the best dream a person could have.  I am deeply grateful to my coaches for their guidance, my teammates for their friendships and the community for their loyal support, each and every one of you has made a significant impact on who I am today.”

During his career, McBride was a community-focused player and following his retirement, will continue his work with amateur athletes both locally and internationally as a Special Olympics Ambassador, an Athlete Ambassador with Right To Play and the director of the Classroom Lacrosse program.  Now in its sixth year, Classroom Lacrosse has provided more than 60,000 Calgary and surrounding area students with the opportunity to experience lacrosse as well as learn about leadership, nutrition, goal setting and the importance of healthy living.  A portion of the funds raised through Classroom Lacrosse are directed to Right To Play and its efforts to educate and empower youth in disadvantaged communities.

In January of this year, McBride joined the Alberta Lacrosse Association as Technical Director and is responsible for the implementation of ALA policies and plans and supervision of all provincial team coaches.  This summer, in his second season as head coach, McBride led the Okotoks Junior A Raiders to the Alberta Junior A Championship following three years as an assistant coach with the Rocky Mountain Lacrosse League club.