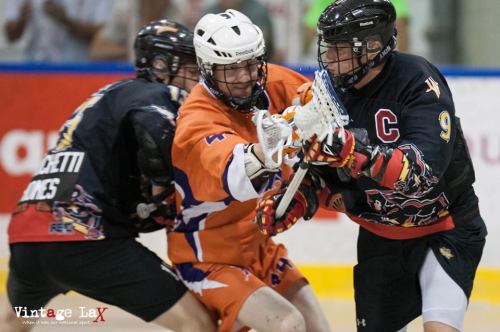 The Six Nation Arrows might have lost the great Johnny Powless along with Quinn Powless and a few other players who aged out. As well they lost Brandon Mountur to the NHL, but it looks like it will not stop the Arrows from defending its crown as Minto Cup champs.

This team is still stacked with talent much of it was on display during the Arrows exhibition meeting with the Calgary Mountaineers. Long time Arrow Josh Johnson is back after getting his first NLL points for the New England Black Wolves as is the same for forward Haodais Maracle who is coming off his rookie season with the Minnesota Swarm. These two looked to be the leaders on the offensive side of the ball in Thursday night’s game. Josh scored three goals in the first as Maracle got one of his own to help their team jump out to a 4-1 team. Josh finished the night with four goals to lead the team has Haodais had (2G, 2A).

Second year returners were also back Jordan Durston and Austin Staats. Jordan was (2G, 2A) Austin who is the younger brother of Syracuse’s Randy Staats had two assists and looked very good coming off an injury that forced him to miss all of last year’s playoff. Ryan Johnston who just got done with his college season at Boston University had a big night with four points. Dallas John as won the last four Founders cup rings with the Six Nation Rebels but he will move to junior A after also spending this winter in CLax with the Ohsweken Demons. It looks like he will fit right into the offense. Also player Travis Longboat who has been playing for the Rebels this year got the call up to play with his brother Greg Longboat. Travis had a solid three points on the night.

Goalie Doug Jamieson just came off of winning a National championship as a draw man for Onondaga Community College but was back in his role as the starting goalie. Doug made twelve saves but did let in Calgary’s lone goal in the first. To replace Doug in net was Briley Miller, who has been putting up great numbers for the undefeated Six Nation Rebels this season. Briley made eleven saves and looked solid in net not letting up a goal in his first Junior A action.

This Arrows teams looks very strong on defense even though it was missing the likes of Leo Stourus, Tyson Bomberry and Shane Simpson. Six Nation got the 11-1 win in the contest vs. Calgary. The Arrows open up their regular season Monday at the ILA at 4:00 pm vs. the Peterborough Lakers watch as Six Nation starts the quest for back-to-back championships.