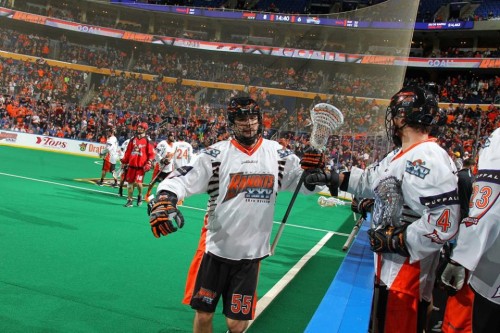 The Buffalo Bandits (8-4) and the Georgia Swarm (4-8) will face off in their third and final divisional showdown of the 2016 NLL regular season Saturday night at the Infinite Energy Arena.

With the second showdown of the season over and both teams sharing identical 4-4 records, their paths began to immediately diverge.

For the Buffalo Bandits, that loss to the Swarm shook the team to the core. During the next four games, the team went back to the basics on both sides of the ball and refocused on improving their overall team effort. Another little bit of relief came the Bandits’ way when starting goaltender Anthony Cosmo returned from injury before their ninth game of the season against the Saskatchewan Rush. These slight modifications/upgrades have helped the team lead the Eastern Division standings on a four game win streak with the team looking for a fifth straight on Saturday.

For the Georgia Swarm, the victory against the Bandits in their second matchup on February 20 has been their final so far with the team looking to salvage what’s left of their 2016 season before it is too late.

Currently in the throes of a four game losing streak, the Swarm used the NLL trade deadline to their advantage by securing Bandits practice player Jerome Thompson and reuniting him with his brothers Miles and Lyle on the Swarm in hopes of revitalizing the team. During his tenure with the Bandits, Thompson has recorded 29 points (10 goals, 19 assists) in 15 career games.

Hoping to lead the Bandits to their fifth straight win will be NLL scoring powerhouse Dhane Smith. The three time 2016 NLL player of the month is currently leading the league with 103 points, ranks tied for the lead in goals with 48, second in assists with 55, first in power play goals with 13 and five game-winning goals in 12 games played this year. Smith is currently on pace for 154 points for the 2016 season which would not only annihilate the Bandits single-season point record of 115 set in 2001 by John Tavares but also the NLL single-season points record of 130 set last year by Black Wolves forward Shawn Evans.

Smith’s performance over the past four games as well as the rest of the 2016 regular season has received nothing but glowing reviews from the Bandits coaching staff.

“Every time the score gets close, I have it in the back of my head that Dhane is going to get us a goal or set up a goal,” said Bandits defensive coach Rich Kilgour. “He makes it so tough on the other team and that’s so fun to watch. If you want to double him, he’ll find the open guy. If you don’t double him, he’ll take it himself and score.”

Hoping to keep Smith away from the scoreboard during the game Saturday will be Swarm starting goaltender Brodie MacDonald and their defensive corps. MacDonald is currently ranked second last in goals against average with 13.73 and 12th in save percentage with .737 over the course of nine games.