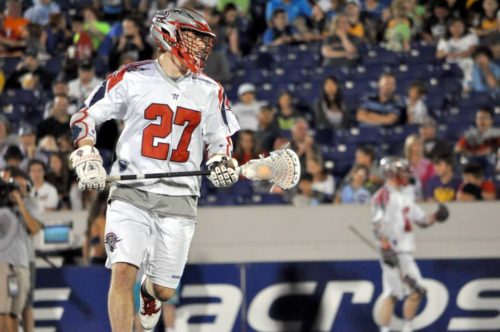 It is the biggest trade in MLL since the deal that sent Paul Rabil to New York.  It took the lacrosse world by storm, with analysts providing all sorts of different takes.  And now, finally, Myles Jones can just play lacrosse.  When Chesapeake travels to Harvard Stadium to take on the Boston Cannons, it will be the first time for Myles Jones in a Chesapeake jersey.

The Bayhawks enter the game at 4-3 overall and 1-1 away from Navy-Marine Corps Memorial Stadium.  Their 91 goals scored rank second to last in the league, but their 90 goals allowed are second best.  A big reason for their stout defense is goalie Brian Phipps, who is fourth in the league in goals against average.  Boston’s goalkeeping is no slouch either; Tyler Fiorito leads MLL with 136 saves (albeit in 9 games played, two more than any other eligible goalie).  The Cannons enter the matchup at 4-5, including a 2-2 home record.

On the offensive end, while neither team has put up spectacular offensive numbers, Boston’s Will Manny is tied for 5th in the league with 36 points (21G, 13A, 2 2-pointers).  The prolific attackman has paced Boston’s offense all season.  Chesapeake is led by former Duke Attackman Matt Danowski, who is top on the Bayhawks with 22 points.  But with Myles Jones thrown into the Chesapeake offensive mix, it should help to propel them to a consistently higher offensive output.

This game features two teams that are vying for playoff positioning; a win for the Bayhawks would take 2 games over .500, and give them an inside track to the MLL playoffs.  Meanwhile, the Cannons will try to get back to .500, riding the prolific Will Manny on attack and steadfast Tyler Fiorito in cage.  In what should be a thrilling game, opening faceoff from Harvard stadium is scheduled for tonight at 7:30 PM