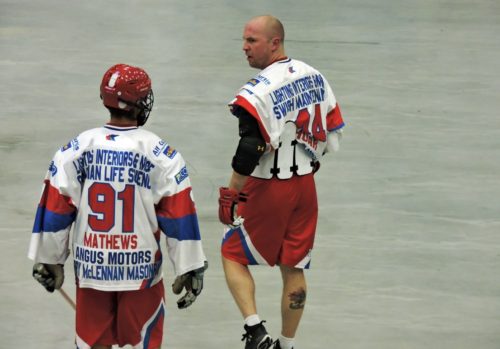 Week 3 of the MSL season saw a logjam at the top of the standings between four teams, with two teams far on the outside looking in.

The Oakville Rock are on a hot streak, winners of two games this week, 13-5 over Brooklin and 7-5 over Brampton. Stephan Leblanc had nine points and Rob Hellyer seven. The pair are heating up at just the right time and Nick Rose is playing steadily in the net.

The Brampton Excelsiors loss to Oakville was their only contest of the week. Dan Dawson had a pair of goals and Tyler Carlson returned to be the Excels starting goaltender. Captain Chris Corbel also returned. They remain in 5th place with just two points on the season.

The Peterborough Lakers week consisted of a hard fought loss in Six Nations Tuesday and a pair of wins over the Cobourg Kodiaks on Thursday and Sunday. The Six Nations game was low scoring until the third period when each team went on a run. The Lakers took a three goal lead which the Chiefs erased in a span of just 1:23 of playing time. The meeting was the first between the two teams since last year’s MSL final in which Peterborough prevailed 6-5 in game seven.

A second period five goal run from the Brooklin Redmen sank the Chiefs the next night. A four goal run in the third period wasn’t enough to propel the Chiefs to a second straight win and they went 1-1 for the week.

The home and home between Peterborough and Cobourg was an intense series. The first contest, which the Lakers won 15-2, left a sour taste in everyone’s mouth. The mismatch was clear from the opening face-off, but the Lakers kept the pressure high for 60 minutes, something they felt was necessary after their loss in Six Nations. The second game the Kodiaks made some adjustments and kept pace with the Lakers for at least the first period before Peterborough’s experience took over for a 15-7 final. There were a lot of positives in the game for the Kodiaks, though; they won a lot of battles against the league’s most difficult team to win against and maybe even intimidated them a bit with some physical play.

Brooklin was a little bit shocked by their loss Oakville and only managed to squeak out a one goal win against the Chiefs. The Redmen had been red-hot and the loss to the Rock allowed the Lakers to take over top spot in the standings.

Shawn Evans of the Lakers leads the MSL with 49 points, 19 more than Cody Jamieson of the Chiefs who sits second. Evans had 23 points in three games this week. Adam Jones of the Lakers sits third with 28 points.

As of Sunday night, Peterborough had 10 points, followed by Brooklin with 9, and Oakville and Six Nations each with 8. Unless a miracle happens, these will be the four teams in the 2016 playoffs, although the order will probably come down to the last couple of games.