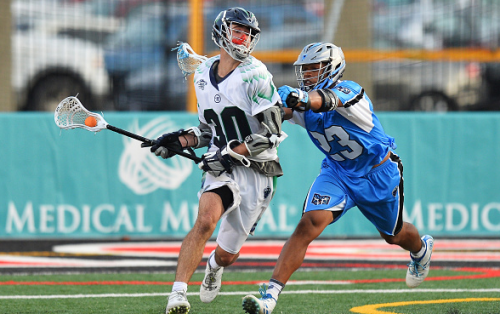 Ohio (5-4), winners of four games in a row, held a three goal lead three separate times before eventually falling to Chesapeake (5-4) in overtime by a 12-11 final score on Saturday at Selby Stadium in Delaware, Ohio.

Machine midfielder Peter Baum returned to action for the first time since May 16, scoring the first goal 1:04 into the game.

Ohio’s Tom Schreiber and Chesapeake’s Matt Abbott would trade goals 29 seconds apart and Marcus Holman scored at the 13:45 mark of the quarter to give the Machine a 3-1 lead after 15 minutes.

A back and forth second quarter would result in the home team taking an 8-5 lead into the locker room at halftime.

The Machine, one of the better offensive teams in the league as of late, had their attack rust in the second half, as the Bayhawks would outscore Ohio 4-1 in the third frame.

Early in the fourth quarter, Matt Danowski scored his third goal of the night with 9:43 left, giving Chesapeake the lead for the first time in the game.

The former Duke Blue Devil put on the afterburners down the left alley and gunned one to the far side of the net, beating Ohio netminder Scott Rodgers.

Rodgers, a former Notre Dame star, replaced Brian Phipps for the evening. He would end up with 12 saves on 23 shots.

Austin Geisler, who was called up this week to back up Rodgers, would make an appearance as well when Rodgers was penalized in the third quarter for an illegal body check.

Geisler, who played for High Point, gave up a goal on two shots.

It was a back and forth ending to regulation, as Kevin Cooper’s ninth goal of the season with 4:27 to go tied the game at 10.

In a deja vu, 2010 NCAA National Championship situation, Bayhawks and former Duke long-stick midfielder CJ Costabile took the ensuing faceoff, raced the ball all the way up the field, and fired one past Rodgers 11 seconds later to give his team the lead once again.

Ohio midfielder Kyle Harrison picked up his 13th goal of the season with 2:43 remaining to tie the game at 11.

Harrison took the ball from just outside of the two-point arc, made a split dodge to barrel down the right alley, and proceeded to laser the ball past Bayhawks goalie Tyler Fiorito.

Fiorito made one of the most impressive goaltending performances in the league this season, stopping 23 of 34 shots sent his way.

A major reason that he was so busy was due to the fact that Ohio’s Greg Puskuldjian dominated former Maryland standout Charlie Raffa at the faceoff x.

Puskuldjian won 19-27 draws on the evening.

In the overtime, Ben Rubeor would play the hero role for Chesapeake, taking a feed from Drew Westervelt in front of the net, faking a shot high to low before finishing in the back of the net.

Each week becomes more critical in Major League Lacrosse, as there are five teams within a game of each other.